Lieutenant Commander Turc Brakur is currently assigned as Sector Operations Officer for the Tempest Sector. He is stationed aboard Outpost Echo.
OOC Note: This is a former PC of the writer for Alucard Vess.

Unlike most Brikar, Turc has an affinity for musical instruments. He excels at the drums, and can even play a custom-made 2 string bass guitar (Otherwise, he is hopeless at stringed instruments, as Brikars only have 2 fingers). He thinks 20th century humans had it right with heavy metal music.

Rarely sits while on duty, he is too heavy for most standard issue chairs. He stood through all of his classes at the academy, after he broke a dozen desk chairs. He sees this as a mere inconvenience though, although others find it a bit odd at first when he is the only one standing at mission briefings.

Dislikes using hand phasers. Since Brikars have hard skin that is unaffected by all but the heaviest phaser settings, he has little fear of them and likes to "dance close" when he is forced to fight.

Turc keeps gravity in his quarters at about 70% Earth normal, which is a good compromise between the gravity he is native to and that which he must function in. When outside of his quarters he must wear a gravity compensator. He calls it his "greatest weakness" because without it, he collapses, unable to get back up again.

When I Come Home
Wreaths of Holly 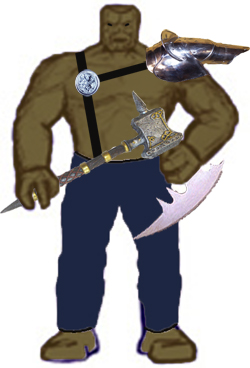