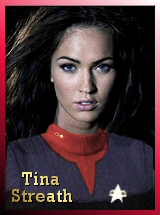 She was born on Rigel VI while her parents were taking time off from cargo running. She was part of her families crew while she went to school on the cargo runner. When she wasn't in school she was piloting the runner and got familar with the weapon systems on the ship. In 2355, she was accepted into the Starfleet Academy. After the mission on Alpha Thesis, she learned that her father helped the Klingons during the Klingon and Cardassian War, before the Dominion War.

Her extracurricular activities include sparring in the holodeck, flying historical shuttlecrafts, and sharpshooting with the old MAKO weapons. She also likes to spar with her Mek'Leth.