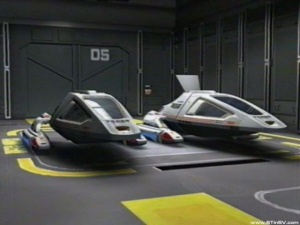 The Thunder-A is extremely well-armed with an impressive array of torpedo tubes and carrying four squadrons of fighters. The Akira Class starship can stand up against just about any known ship in the known quadrants. An interesting item is the class' through-deck hangar bay allowing it to launch fighters and other spacecraft from the front while recovering them aft or vice versa. The hangar deck spans the entire length of the primary hull.