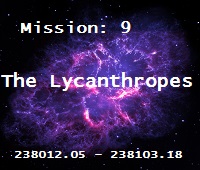 The Victory was ordered to locate the Intrepid-Class, USS Vesta which had been missing for three years after Starfleet had come across a distress call passed along by a private trader. The signal was unmistakably the Vesta and 1,000 light years off her course.

The crew was split into teams.

Lieutenant Commander Story led a team to find the Vesta once inside the graveyard. His team was made up of Doctor Park and Ensigns Suega and MacAran. While exploring the ship, Commander Story located the senior-most officer aboard. He identified himself as Lieutenant Commander Carrey, who told the tale of how the Vesta had received a distress call from a pair of Romulan ships. The Vesta was overpowered by the Lycanthropes quickly and the ship became a three year battleground between the surviving Starfleet officers and the Lycanthropes along with their spider pets. Parker quickly made the decision to evacuate the Vesta and her crew to the Victory. A containment field would be set up to protect the crew from possible contamination.

Commander Avatar lead a team aboard the damaged Klingon ship comprised of Lieutenants Phoenix and Nugra as well as Ensign Fielding, the IKS Korrd named after the famous Klingon General of the 23rd century. While aboard the ship, they found that the ship was covered in alien spiders. They quickly found that a self-destruct system had been activated and since Klingon ships had no escape pods and they could the crew beam off the ship, they had to find a way to shut it down. They came across an auxiliary control room on deck 7 and blew the door open using overloaded phasers. Nugra had attempted to deactivate the auto-destruct, but he was unable since the destruct sequence could only be shut off by a member of the crew. Luckily, a Klingon emerged from the darkness and identified himself as Lieutenant Kavok, third officer. Kavok shut off the auto-destruct and informed the commander that he had activated the destruct sequence to save the ship from the Lycanthropes. Avatar mistakenly thought that the Lycanthropes were the spiders that they had encountered, but Kavok informed the commander that they were just the pets of a humanoid bastardized race known as the Lycanthropes. Kavok spoke of the Lycanthropes, describing them as foul creatures that eat the flesh of their enemy and suck the blood out of their veins.

Kavok pledged his support to Avatar in exchange for the opportunity to avenge the death of his comrades. Despite his suspicion, Avatar agreed to his request. Kavok helped Avatar’s team to retrieve as much information regarding the Lycanthropes from the Klingon computer. The mission unveiled something of a command tower, deep in the heart of the graveyard. It was suspected to be the Lycanthrope home base. Before they left, a Tholian approached, identifying himself as Sub-Commander Tharus of the Hold Fast Vessel Sabre. Tharus had boarded the ship to look for survivors after entering the graveyard in search of a distressed Pakled ship. Tharus also gave the news that the Tholians were immune to the Lycanthrope and their spider pets’ bites.

After collecting as many supplies as possible, Avatar’s team left with Kavok, the commanding officer of the Klingon ship and his crew. Just before beamout, Kavok was bitten by something.

Meanwhile, Lieutenant Hapgood led a team comprised of Lieutenant Anderson, Ensign Blackstone, and Ensign Thomas to investigate the salvage operation taking place in this graveyard. Their search eventually led them to an abandoned and decommissioned Starfleet vessel. As they approached the vessel, their shuttlecraft, the Lord Nelson was drawn into the vessel’s hangar deck, but not before Ensign Thomas was able to send out a distress call to the Victory. Once aboard, the vessel was identified as a Constitution-Class refit, the USS Crusader, NCC-1745. The Crusader was a ship from the 23rd century and once commanded by Lieutenant Anderson’s great-grandfather. Anderson would set out to locate and retrieve the vessel’s dedication plaque.

A Zakdork man was found aboard the Crusader, he identified himself as Locachin. He was a member of a group of survivors that lived aboard the Crusader, hiding away from the Lycanthropes. The Crusader was their refuge. Hapgood was able to help Locachin’s people by bringing aboard several emergency generators from the Nelson. The situation became complicated when Locachin announced to his people that Hapgood and the Victory team were to be their saviors from the Lycanthropes.

The survivors were varied. A Romulan named Torach was aboard who warned Hapgood’s team that they were foolish to mount a rescue and that their best chance of survival was to flee immediately. Anderson hatched a plan to use some of the supplies from the Nelson to repair the ship and at least get it moving. His plan was motivated by his desire to preserve the ship.

Back on the Victory

With the teams out searching the graveyard, Captain Hurne brought some of the mystery to the Victory itself. There were several containers floating in space and he ordered one of them brought aboard. Commanders Cicero and Kora were instructed to investigate. The container was brought aboard the ship and opened in the main shuttlebay. Upon Captain Hurne’s arrival in the shuttlebay, they noticed something odd about the box. It suddenly contained the Victory’s motto, written across the side of it. The situation grew even stranger after the box was opened; a duplicate Kora emerged from inside the box. The only difference was that this duplicate Kora did not need to wear a VISOR.

Upon the return of Avatar and Parker’s team, it was reported to Captain Hurne that the Tholians were in the mix. The survivors from the Vesta were temporarily housed in the Cargo Bay and into confinement under the direction of Doctor Parker. The quarantine turned out to be quite necessary as several of the Vesta crew had actually begun to mutate. During the quarantine arranged by her own orders, it was also discovered that Doctor Parker was also pregnant. Phoenix and the Klingon Lieutenant Kavok had been bitten by the spiders. It was hypothesized that the venom from the spiders caused a mutation. The trace venom from Phoenix’s trousers was Parker’s first attempt in learning about the mutation effect. Kavok was not pleased about being held in confinement, especially since unbeknownst to anyone else, he had already begun to mutate into a Lycanthrope. But that mystery was short-lived as the EMH and Lieutenant Phoenix picked up something in Kavok’s DNA patterns. Apparently he was no longer just a Klingon. The situation caused great rage for the Klingon as he protested that he was not sick. This lead to an ugly confrontation with Ensign MacAran, who is half-Klingon