Difference between revisions of "Taurek"

Ensign Taurek currently practices within the Counseling Department of the USS Constitution-B. 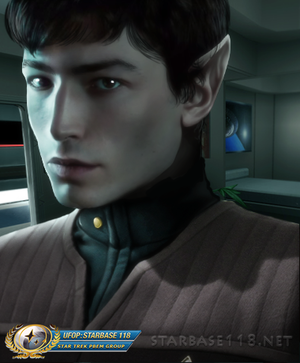 Taurek's betrothal was formally dissolved by agreement of both parties in 2349 and he underwent physical reconfiguration surgery after reaching the age of majority.

He went on to study psychotherapy and counselling off-world before entering the Academy with the aim of becoming a Starfleet counsellor.

Though he maintains a Vulcan outlook, Taurek endeavours to gain as much emotional insight into other species as possible, and is unusually understanding for a Vulcan.