N.P.C. T'Lirin is a vulcan female civilian, who currently resides on Earth. 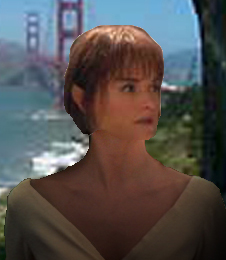 Hair Color: Naturally black, has dyed it red, 101.6mm of end of hair is white. Like a foxes tail.

Length of Hair: To small of back

Birthmarks: Light birthmark on right side of buttocks.

Carriage: Timid, shy when alone. With friend or husband, more confident, and open.

Poses: Straight backed with hands in front of body. Sits with knees pulled up close to chest with arms around legs.

Taste in Clothing: Long flowing garments, vibrant colors, usually with something close-fitting underneath.

Mannerisms: Gestures with hands while speaking, will run hands through portion of hair

Likes: Smell of flowers and candles, music, her dog, and being with her husband

Ambitions and Goals: Effect a life with her art, raise a family

Achievements in Life: Being an artist in spite of her blindness

Disappointments in Life: Being unable to see

Father(Adopted): Human. David William James, Human. Born Stardate 234506.23 in Pella, Iowa he grew up on the farm with his family. He was a star football player for his high school team and went to Iowa State University on a sports scholarship. There he studied business and married Virginia Terpstra. After completing basic courses He applied to Eribrus II and joined his wife on a trip to see some friends in New York. While there the friends died. They were able to adopt there daughter and took her to the station with them. Is currently serving as Lead Business Administrator. David is kind and practical. He is 2 meters tall, black, bald, with brown eyes, and is slightly overweight. Has a big, infections smile. Age is 41.

Mother(Adopted): Human. Virginia Catherine James, Human. Born Virginia Catherine Terpstra on Stardate 234509.01 in Lynnville, Iowa. She was academically successful throughout her young life paying her way through college on scholarships alone. Never socially popular, in high school or college, her meeting David was an accident. He needed help with chemistry. They hit it off and were soon married. They went to New York to see her old friends, Servek and T'Nen, from high school. They died in a vehicle accident while on their way to see their newborn daughter. David and Virginia took sole custody of T'Lirin and took her to Eribrus II with them. She would return to earth to get her Doctorate in Bio-Chemistry. She is currently employed as a scientist on station. Virginia is eccentric, almost completely absorbed in her work. She is 1.7 meters tall, black hair, glasses, green eyes, and is slim. Age is 40.

T'Lirin was born blind. Having lost her parents at birth she was quickly given to their closest friends, David and Virginia. David had just accepted a position on the mining colony of Eribrus II. The new family was introduced to N'veir, Seyla, and a young K'jharr and quickly became good friends. K'jharr and T'Lirin were inseparable, he protecting her, she understanding him. She would suffer from a premature pon' farr cycle at age 10. The eccentric T'Sael would help her through this time. K'jharr would later learn that T'Sael had used T'Lirin's cycle to abuse her. K'jharr would kill T'Sael but would be absolved of the subsequent murder charges due to T'Lirin's testimony. She would visit him often while he was in a mental facility. In spite of all of this she excelled at academics, and would become valedictorian of her high school. At 17 she would be married to K'jharr in time with her pon' farr cycle. She is currently going for her Masters at the San Francisco Institute of the Arts on Earth.

237911.18: Responsible for charges against K'jharr being dropped

2386... : Currently enrolled at the San Francisco Institute of the Arts