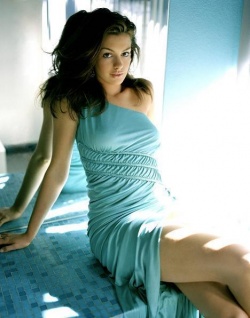 Nicole is 5'7", 126 lbs. She wears her dark brown hair short. She has a tattoo of a butterfly around her left ankle. On her left wrist while off duty she wears a rainbow pattern chain around her neck. (She is openly bisexual.) She considers herself cute, Not overly attractive or jaw dropping gorgeous.

She is not an athletic person. (She in fact loathes Physical training.To the point where she refers to her figure as, "The body fudge built.") While she is not fat, She does consider herself slightly unfit.

Nic was born on a Starfleet vessel, an Oberth Class vessel named the USS Tycho. A deep space explorer. Her parents are two senior officers who currently serve still. Her mother is the Security Officer and her father is the Chief Science Officer.

Nicole while growing up on a starship, made a lot of friends with the crew. One in particular was the daughter of the Ship's Steward. The two became fast friends. During her teenage years, She became Nic's first real crush. Which left her very much confused. Nic rarely talks about this aspect of her life.

She spent her time on the Tycho asking how things worked. She became more and more curious. One day she dismantled a tricorder. She was unable to put it back together. Instead of being charged with destruction of military property, She spent time with one of the Engineers aboard learning how to make it work again. That lit a fire inside of her that she could not put out. Soon she was asking all kinds of questions. By the time she had turned Eighteen, she had managed to learn enough about small equipment that she was allowed to handle Tricorder diagnostics as well as small equipment calibration.

Nic applied to Academy when she was Eighteen. She was accepted on her first try. Being the daughter of two Starfleet officers it was assumed that she would go far. She enrolled in the Engineering Courses. She was a B student through most of her classes.

For her final project, She and her project team constructed a Shelter that used a solar powered generator with a battery backup. It was meant to withstand high amounts of heat. In theory it was to be used to house colonists on class L worlds while they were teraformed..

The shelter not only withstood the heat it was exposed to, But believed it could handle stresses of other environmental conditions. Nic was asked to submit an application to the SFCE. She was accepted into their training program. She was made to spend the next two years in an accelerated training program on both Earth and Mars, Specializing in Colonial reconstruction and Settlement Construction.

Nicole when off duty is a very laid back and easy going person. When that uniform comes on she becomes repressed,driven and very serious. She is also ambitious,

Her immediate goals are to become a Section Leader under a Chief Engineer and work her way up to a Department Lead, Or if she can get experience under her belt, Chief Engineer of a Construction Project or a Starship. She has an intimate knowledge of Oberth Class Vessels. Having lived on one most of her life and being assigned to one in the Simulators.

-She is openly bisexual. She also has no problem flirting with either gender. Upon Graduation she had a brief fling with her former roommate, Ensign Vance. The two remain close to this day.

-While she is half betazed, She is not telepathic, Nor is she really an empath. In order for her Empathy to work, she has to touch the person. To get her to do so requires a great amount of coaxing.

-She is 24 and acts like it. She enjoys partying.

-Has a butterfly tattoo around her ankle.

-Speaks to the Computer in a polite manner, as if it were a real person.

-Her favorite food is Izarian Delight.

-Her favorite beverage is Champagne when she can drink, When she cannot its Starfruit juice.

-When tipsy she tends to pick up a English accent, (Her fathers Upper class accent.). Sometimes she will mimic the person she is with accent, much to thier dismay..