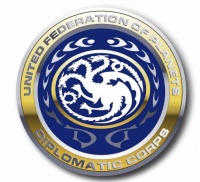 Because the Drake operates on the border of known space, Starfleet has seen fit to grant her a small detachment of diplomatic officers to provide for first contact situations, informal negotiations, etc. Their offices are small and their crew few in number, but they serve with distinction.

The "small detachment of diplomatic officers" actually consists of one individual, Commander Valis. Nevertheless, the Drake had aboard her two civilians with diplomatic experience whom the Commander has elected to employ. To accommodate efficiency and avoid confusion, the Vulcan insists they each wear Starfleet uniforms bearing Diplomatic colors and provisional rank insignia while on duty. 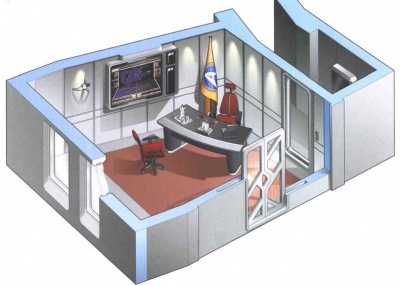 The Diplomatic Offices aboard the USS Drake consist of two rooms of roughly equal size, the Department Chief's Office and the Diplomacy Room, plus a small kitchenette adjacent to both for preparing refreshments during negotiations and coffee and sundry during normal duty shifts. The Diplomatic Suite is located on Deck Four of the saucer section at the fore edge of the Engineering tower to allow visiting dignitaries a calming view of space during tense negotiations.

The Drake also has a limited number of V.I.P. Quarters designated for diplomatic purposes, should visiting dignitaries require housing for a short time. They are modest compared to such quarters on the vast majority of Starfleet's newer ships, but they are nonetheless the best housing available on the Miranda class vessel.