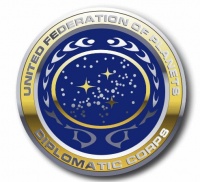 StarBase 118's status as the major spacedock complex in both the Trinity and Serellan Sectors and its close proximity to both the Romulan Star Empire and Klingon Empire necessitates a large contingent of diplomats and associated personnel, as well as a suite for the express use of the Starfleet Diplomatic Corps.

The SDC's presence is not exclusively comprised of diplomats and their aides. The diplomatic suite maintains its own science and medical facilities, set aside for the use of foreign and Federation diplomats, and a security division, separate from base security and with the primary duty of protecting the Office's personnel and visiting dignitaries.

Because of the specific clerical and cultural training received, enlisted crewmen in the SFDC are called 'Stewards' instead of crewmen as their primary tasks do not include the operations of ship or station facilities.

Typically, the base plays permanent host to one or two ambassadors or envoys, with a variety of aides and supplementary personnel assisting. From November of 2385, when the Office was established, the Envoy-in-Residence has been Lily Ventu, a woman who holds a dual residency in the Federation's Starfleet as a lieutenant commander. Ventu is assisted by her primary helpers.

The Lysandro ambassador Buoyant Drifter has their quarters here.

Security personnel are by far the most numerous in the SDC office, if only to ensure that each delegate, diplomat, or dignitary is escorted by no less than half a dozen at any given time. Each member of the security staff is employed by the SDC, but some may hold dual residencies in the Federation Starfleet or in other security organizations.

The SDC office on StarBase 118 is located in the administrative section of the base.

A double-level facility. The majority of the work of the SDC's employees is accomplished in this office, including nearly all of the science work and the day-to-day minutiae of scheduling, vidscreen messaging, liaising, and such.

The Diplomatic offices are home to a number of small and large boardrooms and lecture halls to accommodate the various needs of meetings. This includes one large hall that can be holographically converted into a ballroom of for large affairs and receptions.

The envoy's or ambassador's personal office. Typically, it will serve as the meeting place between the envoy and foreign diplomats.

Although most diplomats will choose to utilize their own vehicles or the base's diplomatic quarters, a small number prefer to be housed directly by the SDC, and the office maintains a small number of luxury quarters for that purpose.

An office for the SDC chief of security and his or her detachment of officers. Typically, only a quarter or less of the SDC's security personnel will be on duty at any given time, allowing the security office to serve as a spacious briefing and training facility.