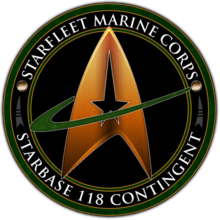 The Marine Contingent on StarBase 118 Operations are the "Dangerous Company." They are a new Platoon assigned to the Starbase for extra tactical aid during hard times and hard missions. They are the best in their chosen fields, hand-picked for the assignment.
A Starfleet Marine is sworn by an pledge with withhold the values of Starfleet and the Federation. They are bound by duty to protect and to serve the Federation, sometimes by any means necessary. It is interesting to note that the Marines' oath is to the United Federation of Planets and not to Starfleet, although they bear the name. Should the unlikely situation occur in which Starfleet as a military arm opposes the Federation, the Marines would be obliged to defend the UFoP against Starfleet.

In their contingent, the Marines are part of a selective group including fighters, heavy armoured units and land vehicles. All are maintained by the Engineering Department on the StarBase.

Dangerous Company is divided into three squadrons, commanded by Squad Leaders. This makes it easier for orders to be distributed and objectives to be carried out. Each squadron consists of ten, men and women, who are specialists in their fields of study. Some Engineers, others Scientists, more than not most work with Demolitions or are qualified Pilots. Whatever their occupation, the Marines are trained for heavy-duty battle scenarios that Flag-Officers would have to withdraw from. They are the back-up for the back-up.

On the StarBase, the Marines of Dangerous Company are required to respond and report to the Tactical and Security departments. They must be available for extra Security when needed and respond diligently. Each member of the Marines detachment is fully trained in both StarFleet Security and Tactical, so they can take the place of said Officers in the event of an emergency.

It's not unheard of for Marines to do Bridge duty, however, they have a semi-Bridge in their facility named the CIC. This hub of sorts acts as their Control Room for deployment of equipment and troops, managing their duty rosters and maintaining contact with their platoon at all times during Away Missions. The CIC Controllers work closely with the Bridge Officers to coordinate rescue operations and on base military presence when required. 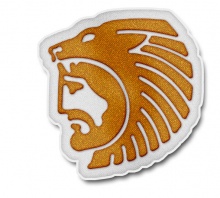 In addition to being a first-response unit for any space-born threats to the station, the squadron also flies escort for both civilian and Starfleet vessels as required. The pilots of Herakles Squadron participate in a near-continuous Combat Air Patrol (CAP) around the station and into the Serellan sector as required.

The primary vehicle used by Herakles Squadron is the FI-25 Crossbow Interceptor, though the squadron has access to and free use of any of the Marine vehicles assigned to Starbase 118.