Difference between revisions of "Star Portals" 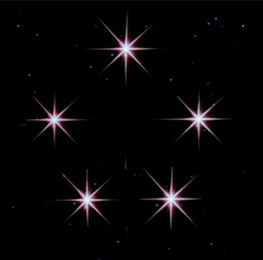 The knowledge of these transportation devices was lost 13,000 years ago with the disappearance of the Chon Empire from the Par'tha Expanse. Archaeological research by Dr. Rathmin of Deep Space 26 has recently uncovered information about these devices.

The Chon Empire had faster than light capabilities on their starships, but with an upper limit of warp 3.5. As it stood, this would not be fast enough to retain control of their empire, moving their military where it was needed. Fortunately for the Chon, early in their warp research scientists had discovered technology capable of folding space. With this knowledge, they would be able to travel from one point in space to another almost instantaneously, regardless of the real-time distance between the two points. They created devices which they named "star portals."

Star portals are a grouping of five devices, working in unison, to create a folding event. They are placed in space equidistant from each other on a two-dimensional plane. Usual locations for star portals are several hundred thousand kilometers from a homeworld, or in a common location in systems where there are multiple worlds settled. They are able to pull power from a layer of subspace, and are in constant communication with the entire star portal network. Coordinates of each star portal location are stored within each grouping. A starship approaching a star portal would transmit its desired location to the star portal, which would in turn fold space - connecting itself with a star portal at the other end. Transit time between two portals is near-instantaneous.

Once the Chon left the Par'tha Expanse, they left the star portals behind. Unfortunately for the Caraadians, the newcomers on the scene, no information was left on the devices, what they were, or how they worked. Many star portals are still in place, floating uselessly in space, undiscovered by local species, or dismissed as space debris. Some star portals have been destroyed in some systems because the local species did not know what they were or why they were there.

Dr. Rathmin is currently decyphering data on the star portal network, found in the ancient computers and other writings on the abandoned Chon outpost now occupied as Deep Space 26. Information on how the devices work, the technology involved, and the location of each remaining star portal in the network is incomplete, but rapidly gaining interest by the Federation scientists as an alternate to warp travel. It is hoped that once more information is uncovered, that new devices can be built or replicated and placed in other systems throughout the galaxy.