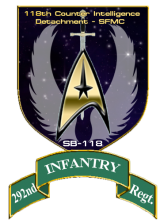 The Marine Contingent on StarBase 118 is the 118th Tactical Division, or the Screaming Eagles. The 118th is a relatively new division within the Starfleet Marine Corps that specializes in base operations and small scale conflicts. This specialization reflects the unique challenges that Marines face when stationed on one of the mammoth Starbase's throughout Federation Space. The 118th is a pilot program and the first division of its kind.

Assigned to Starbase 118 just a few short months prior to the arrival of Captain Jaxx, the 118th is always ready to respond to the needs of the fleet. Be it defense of the station itself, or the provision of ground forces by ally planets and races in the area, the men and women of the Screaming Eagles are the best in their chosen fields, hand-picked for this specific assignment and trial program.

The 118th Division consists of the following units:

All land and space vehicles operated by the base Marines are maintained by the Engineering Department on the Starbase in conjunction with Marines specialized in the crafts themselves.

The 'Screaming Eagles' consists of men and women who are specialists in their fields of study. Some Engineers, others Scientists, more than not some work with Demolitions or are qualified Pilots. Whatever their occupation, the Marines are trained for heavy-duty battle scenarios that Flag-Officers would have to withdraw from, as well as defense for the station in the event of an attack. This specific division is also able to respond to the needs of federation worlds within the vicinity, providing protection both on land and in space when needed.

On the Starbase, the Marines of the 'Screaming Eagles' are required (unless otherwise specified, IE - R&D, Medical) to respond and report to the Tactical and Security departments. They must be available for extra Security when needed. Each member of the Marines detachment is fully trained in both StarFleet Security and Tactical, so they can take the place of said Officers in the event of an emergency.

Starbase Marines have a semi-Bridge in their facility named the CIC. This hub of sorts acts as their Control Room for deployment of equipment and troops, managing their duty rosters and maintaining communications between members of the division. The CIC Controllers work closely with the designated Marine Bridge Officer to coordinate rescue operations and an on base military presence when required. There is always a Marine on duty in the main Starbase 118 Command and Control center.

Currently, the Starfleet Marines operate in a galactic time of peace. Though some divisions may be participating in combat at this time, it is not spread across all of Federation space. As such, many divisions, including the pilot 118th division program, operate under peacetime rules.

To take this a bit higher, the 118th is tasked with integrating with Starfleet personnel aboard Starbase 118 rather than falling into the same old rivalry and arguments of days gone by. In order to facilitate this integration, many aspects of this division are handled and supported by teams and departments on the Starbase under the employ of Starfleet.