The Habitat Areas of StarBase 118 refers to the two sections of the base which house permanent and temporary residents of the base, including civilians and StarFleet personnel.

There are two distinct habitat sections: upper and lower. The upper section spans 274 decks while the lower spans 272, and is smaller in diameter. Housing is diverse throughout the two sections, with neither zoned for any specific class of resident more than another. There are, however, numerous different types of residential areas.

There are five different types of available housing units. Incoming permanent residents of the base can contact the housing authority before arrival to have a unit available as soon as they are cleared through the base's immigration center. However, those residents who do not have the opportunity to arrange for housing ahead of time may be required to be housed in temporary quarters until an appropriate residence can be prepared.

For those personnel or civilians who will be taking residence on the base for less than 60 days, temporary housing is available. Tourists or those of shore-leave often opt for the hotel and guest-house locations that are found within the habitat dome and commercial areas. These locations often charge some type of fee for their services, depending on how extensive the services and accommodations are.

Those that have no preference, or no form of money, can stay in base-assigned temporary housing in the habitat areas. Temporary housing is located completely on the interior of the base in apartment style zones, all designated only for temporary residents. 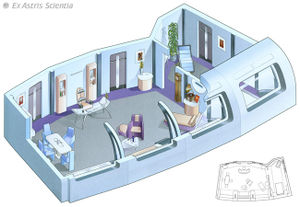 In the simplest type of zoning, residents are housed in blocks of 40-60 moderately-sized apartments which share a common lobby and entrance. As with all other zoning types, StarFleet personnel and citizens are mixed freely. Generally, residents of these areas are childless, or have very young children who do not require their own room yet.

Units within this style of housing include one-to-two bedrooms, distinct dining and family areas, as well as one full washroom. Replicators are standard.

Community areas are few in this type of zoning, generally limited to a gathering space for meetings and recreation. It is important to note, however, that many of the apartment style zones are located on the exterior ring of the base, giving these units access to true windows. Other styles of housing, explained below, share communal areas which makes it difficult to fairly place one or another unit with a true window. As such, being that apartment style zones do share common corridors, it is easy to place them all along exterior bulkheads, and make the distribution of windows among the generally unrelated residences more fair. 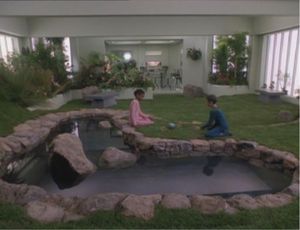 One style of a shared lounge.

For residents wishing to maintain their own apartments, while living in close proximity to friends or relatives, the suite style of housing is an optimal fit. In this type of zoning, three to six apartments will share a small lounge area and one central entrance, off which the private residences are maintained. Similar to the community style housing (below), the lounge area contains some type of simulated window, which can be customized to the resident's tastes for the regular viewing of outdoor scenes. All of the suites will always have windows (which can be easily changed from opaque to translucent to transparent) which view the lounge and allow light from the simulated window to shine through.

Apartments within this zoning are nearly identical to the simple apartment style zoning, and include one-to-two bedrooms, a distinct dining and family area, and a full washroom. Replicators are also standard here.

Those residents with larger families often request this very popular style of housing, which sustains over 50% of those living on the base. In this setup, 12-18 larger housing units share a central atrium which may span from four to six decks.

At the centre of these atriums would be an interior area with parkland, ponds or gardens planted inside the starbase to simulate a planet surface and relaxing atmosphere.

All atriums in this setup include a simulated "window" ceiling, which cycles from daylight to evening hours. Atriums are also constructed with greenery in mind, including at least one large arboreal plant situated on the bottom deck of the atrium. Around the flora is also built a central gathering space, which can be converted from a play area for children to a meeting space for adults. This style of housing also forgoes the larger dining areas within each house, which may be found in other styles of housing on the base. Instead, a communal dining area is provided on one floor of the atrium -- although each individual unit still maintains its own replicator for small meals, snacks, and supplies as necessary.

Each house in these small communities maintains its own private space, with a secure front door. However, units must be accessed from the community space, into which there are only two entrances -- usually one on the highest level, and one on the lowest level.

Housing less than 5% of the base's population, the privacy residences are few-and-far between in the habitat areas, though wildly diverse in layout and architecture. Houses of this type have access directly off of a corridor, as opposed to all other housing types, which are accessed via lobbies (apartment style), lounges (suite style) or communal areas (community style).

Privacy style residences cannot easily be categorized, as some are quite small (one bedroom), while others maybe very large (four-to-five bedrooms). None share facilities with other houses, as this style residence is dispersed quite widly among the habitats.

Despite their singular nature, these residences are highly sought-after, and waiting lists may be longer than five years at a given point in time. They are generally reserved for V.I.P's such as the Admiralty, the commanding officer or the head of the station's intelligence department who require privacy (although some of these may instead opt to live in other types of living area). 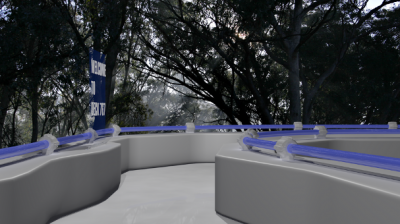 It is important to keep in mind that the vast majority, close to 85% of all residences, are located on the interior rings of the base. That is, most of these locations do not have window access. As such, the architects of the base found it necessary to create pleasing spaces that kept a natural feel to them. Some of the residence types, as you have read above, have communal areas which make life without exterior views less difficult. Nonetheless, both the upper and lower habitat areas have a multitude of "park-like" spaces, accessible via the main corridors, open to all residents. The architecture of the spaces vary from large to small, and will often include small flora, benches, soothing nature sounds, and sometimes child-accessible play structures.

Pathways between residences and even decks often include views out to the surrounding dome so that views like the one on the right are easily accessible from anywhere in the habitat section.

To keep residences both secure and private, the base's security operations take very seriously the accessibility of housing. The simplest form of security involves housing temporary residents in completely separate areas from permanent residents of the base.

As you have read above, only one type of housing ("privacy style") actually has a "front door" on a main corridor. All other types of housing are situated via central access points. In this setup, for a resident to reach their unit from, for example, the commercial habitat dome, they would first utilize a turbolift to their general housing area. From that point, they would continue along a main corridor to the "address" of their housing style. At this door, they would be required to verify their identity, usually in the form of voice identification, or personnel "badges" (StarFleet Com style or card style).

To maximize the housing in the habitat sections, many of the community "resources" that would normally accompany a residential area in a normal city have been moved to other areas of the base.