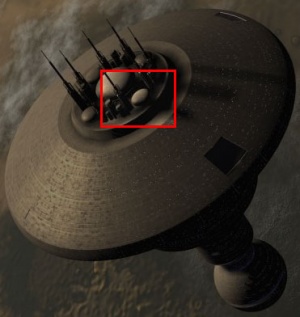 The Flight Ops of StarBase 118 is the nerve center of all astroflight and Flight Combat operations activity on or around the starbase. Manned around the clock by highly-trained officers, this crew manages all things Flight, from Shuttles, Runabouts, Fighters, to cargo transport and workbees. The Flight Operations is Managed by the CAG (Commander Astroflight Group) Leader and the Chief Flight Officer. 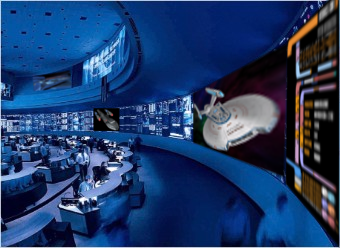 There are a lot of Stations around the room in a semicircle. The center of the Room on a raised section is Flight Control Command, There is Master Display Table in the center with six chairs around it. The Mission Directors Station, The Chief Flight Controllers stations, the CAG's Station and the Chief Flight Offers Station. Going out and around the room you have the support stations to try and make all missions as safe and successful as possible.

You have the Flight Medics Stations, Made up of a few Doctors and Flight Nurses on the outer rows. The you have the Flight Engineers that can track all ship wide activity for each shuttle or fighter. You have your Tactical Officer Stations, watching to see if there is a pattern and passing along info to the pilots. Outside that and the greatest amount of Stations are the Flight Controllers, on Controller can track 12 flights on there screens in Combat and 20 in just day to day operations.

There are a few auxiliary stations around the room and can be changed to fit the need of a mission to include and station at the front of the Flight and Control area that is a guest Station for the Stations Commanding Officer, and two VIP observation Stations of each side of the Commanding Office.

At the rear of Flight Control and Operations is a long glass wall, with a lounge on the other side of the wall, guest can sit in there and watch mission and be out of the way. The Director can frost the windows solid if need be from his/her station. 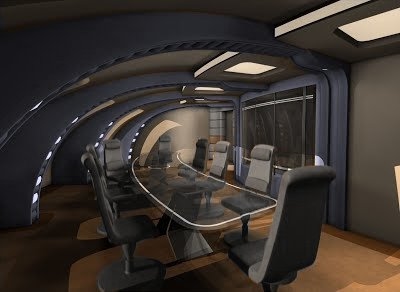 All round the Tower are the Flight Ops Briefing rooms, they are all alike is style and design. The glass top tables are smart zoned LCARS and display, touch style interface. The Table Top can even project Holo images and video feed into the space above the table. You can move the image with your finger or a pointer. Double touching a ship and creating a new flight path and target projections. It Makes planing in a Staff Briefing easy and a clear objective.

There are 18 Briefing Rooms like this in the Flight Tower. 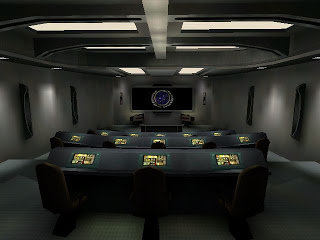 The Squadron Rooms are housed on different levels of the tower and also around the different flight bays in the starbase her self. Each Squad has two briefing rooms, one in the Command Tower and one next to there flight bay.

The Squadron Leader has a station on the lower level at the view screen with the pilots in seats about the upper levels. The rooms range in size from small to large depending on the units. Some are all Marine Units, some are all Star Fleet Units and then there are some Mixed Units as well as a group from Starfleet Core of Engineering, that works on loading and unloading of ships and doing repairs and refits as needed.