Difference between revisions of "Stadi Prox"

Lieutenant Junior Grade Stadi Prox is a Science Officer on board the U.S.S. Ronin 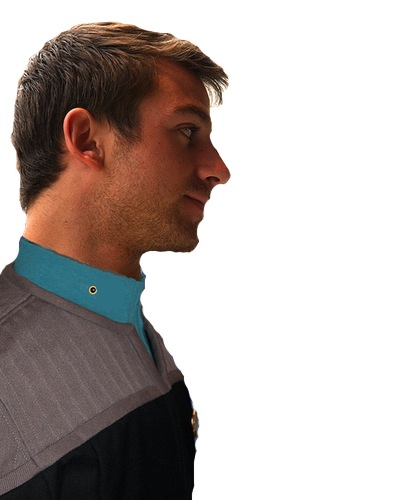 Jassa Lenari was a fellow science officer on board the U.S.S. Ronin. The two had developed a friendly rivalry on Stadi's first mission. Since their relationship began, Stadi noticed that she was uncomfortable around telepaths. She would constantly recite numbers in her head to keep Stadi out. In 2387, Stadi had to use his telepathy, alongside Cura Assanti, in order to communcate with Jassa due to a temporal anomaly.

Nickolai was Stadi's roommate onboard the U.S.S. Ronin. Nickolai a Terran is an engineering officer. The two have a very timid relationship.

Stadi was born to his parents Nadia and Sabin Prox at Lake Cataria on Betazed. Stadi had a good childhood and often was seen playing games with his older brother, Galvin.

When the Dominon invaded and occupied Betazed, Stadi, against the wishes of his family, joined the Betazoid resistance to fight the Dominon threat against his homeworld. Stadi quickly rose through the ranks of the Resistance to achieve command of his own unit. During, an undercover mission to take back a strategically important military base from the Dominion, Stadi was attacked by a Jem'Hadar soldier. He now has a scar running down the left side of his face.Stadi was presumed killed during the Dominion occupation of Betazed, resisting a fleet of Jem'Hadar footmen. It was during these years that Stadi had become violent and vengeful.

During his time with the Betazoid Resistance, Stadi became very involved in biological countermeasures against the Dominion. Stadi had created a pathogen that attacked the nervous system of the Jem'Hadar, effectively immobilizing a good portion of the Dominion's forces.

On stardate 238406.17 Stadi's brother, Galvin, discovered that Stadi was infact still alive when his presumed dead brother was involved in a brawl with a Cardassian on Deep Space 17. During an argument Stadi attempted to attack the Cardassian with a knife, but he had gotten shot with a phaser before he could inflict any wounds. Galvin was on the promenade during the incident, and beamed his brother to the Triumphant's sickbay. After several days of intensive care, Galvin made the order to revive Stadi. However, Stadi then became worse and Galvin realized that he did not have the facilities to take care of his brother. Galvin, to his reluctance, arranged for the Gibraltar to take Stadi back to Deep Space 17.

After Stadi had recovered from his injuries onboard Deep Space 17 he had chosen to try to change his violent, vigilante ways. He decided to follow in the footsteps of his older brother, Galvin, and enlisted in Starfleet. Stadi accelerated through the Academy in only 3 years.

Stadi frequently has flashbacks to his days in the militia. This often affects his work, and he tries to suppress an feelings that might trigger a panic attack. After this incident, Stadi was confined to his quarters by Dr. Jackson Teller

Stadi, like his brother Galvin, was diagnosed with telepathic incontinence during his childhood. It is unknown why this rare disorder occurs. Stadi has spurts of uncontrolled telepathy in which he cannot phase out the thoughts of those around him. This disorder often makes those who know about (and do not know about) the disorder nervous around him.

During a mission in which Stadi and Commander Cura Assanti had to make a telepathic link with Captain Benjamin Walker Stadi lost his telepathy when a psionic inhibitor was put into place around the ship that contained the Captain.