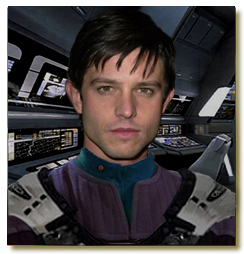 Maxwell could perhaps be characterized as borderline Aspergers. With the unusually low self-esteem, he is socially isolated and awkward. His body frail and wasting away, he prefers to take refuge within his own mind. He often thought of himself as like a quantum superposition. The slightest interference from the environment would destroy his coherent train of thought, collapsing his wave function, and his state would decay and decohere. He could only be himself when he was alone.

Maxwell Spinrad was born to astronomers on Pluto's moon Charon, where the light pollution of the sun is at its lowest in the solar system. As gravity on the tiny world is less than 1/20th that of earth normal, Maxwell was born into near zero gravity conditions and remained so for most of his early life. Either unable or unwilling to leave their work, his parents gave little thought to the welfare of their newborn son. There is also little indication that his parents were ignorant of statutes under federation law that virtually outlawed the raising of human children in such condition. (It is even possible that they might have intended it, viewing their son as simply another experiment to satisfy their own curiosity.) Not only was it made illegal because it was considered cruel and inhumane to the child, but there are certain concerns left over from the days when eugenics were banned. It was feared that, free from the bonds of gravity, the brain would expand to form more neural pathways. It was suggested that humans allowed to be born and grow and live in such an environment could gradually evolve into a new species of human, a next stage of human evolution.

As noted above, the result of his cold and detached parents consequently left Maxwell a withdrawn and isolated child. At a very early age he learned to retreat into his own mind, finding company in books and finding escape in mathematics and physics. It was this ability, and perhaps a desire to escape an unhealthy home environment that led him to apply seek his education on earth.

At age 16, he applied and was accepted for the Natural Sciences tripos at St. Johns college at Cambridge.

Upon his arrival on earth, it would be revealed to him that his entire acceptance at the university was the work of a think tank of patients at a secret Federation mental hospital referred to only as "the Institute" who had been genetically engineered in a process called accelerated critical neural pathway formation. Their plan was to recruit Max for their project to alter the cosmological constant of the universe, ensuring that the cosmos never collapses into a 'big crunch' nor continues its acceleration fast enough that spacetime is torn apart. They needed Max's ability to intuitively grasp the mathematics of space and time.

Max refused to help, believing that the price of failure would be too high. The project was halted when Max brought it to the attention of their supervising psychiatrist, Dr. Karen Loews. Maxwell continued on to Cambridge, trying to put the incident behind him.

And although he would do exceptionally there academically, his physical adjustment to planetary life was poor. Confined to a wheelchair at earth normal gravity, he was extraordinarily disabled. (See medical file for more detail). One incident that stood out was not long after he first arrived, a professor patted him on the back congratulatorily, and was horrified to hear the sound of three of Maxwell's ribs breaking. Maxwell would describe his first years on earth as like 'living under the bottom of the ocean'. His lungs labored to breathe in and he constantly felt the sense that he was drowning, his heart struggled to provide enough circulation for his body. Physical therapy proved inadequate and only served to accelerate his physical decline. He was, and still is, in a constant state of fatigue and exhaustion that increases cumulatively the longer he is in earth gravity. It is for this reason that during this time, university physicians told him he would in all likelihood have a far reduced life span if he continued to live in a terrestrial environment. Although they initially predicted him perhaps making it as far as into his late thirties or further, such an optimistic prognosis was later revised to be considered unlikely.

All this only served to further deepen his existing psychological scars; his growing isolation and his escape into his studies and away from other people and the rest of the world. While as a result of his disability, he was extremely focused and productive at this time (achieving several all-time high test scores at the university) this should be best viewed as an example of an unbalanced individual. His advisor noted that on many occasions Maxwell described himself as 'something wrong, something that should have never been brought into the world.'

Nevertheless, his test scores opened up many new opportunities for him. It was a combination of his natural inclination toward the physical sciences and his potential usefulness in the study of newly discovered phenomena and his psychological need to be back in space that helped him make the decision to apply to Starfleet Academy. And although he would only discover later, this decision would prove fortuitous for yet another reason. The same year at Starfleet Medical they had just finished clinical trials of a prosthesis of bionic exo-skeletal braces that could support someone in his condition in earth normal gravity. Although this would help him with mobility, ending his need for a wheelchair, they of course could do nothing for his internal biological systems, which continued to labor intensely at one gee.

Despite his health, it would be there at the Academy he would come under the mentorship of Professor Vassbinder, who as Maxwell's thesis advisor would become the first real father figure he had ever had. Under Vassbinder's guidance he published a series of papers attempting to reformulate subspace physics in the language of Gerard 't Hooft's cosmological holographic principle and the Bekenstein Bound. He was only partially successful and the reaction in academia was muted. Vassbinder would seek to encourage Maxwell to stay at the Academy as one of his post-docs. After much thought, Maxwell declined on the grounds that new physics would not be found by standing at a chalkboard and writing equations, but in going out and finding it at the frontiers of the known universe. The universe itself, he reasoned, was the best laboratory they could ever hope for.

He was posted on the training ship USS Centris in the science department, with a specialization in investigating unexplained stellar/space-time phenomena. In his final holodeck training mission aboard the USS Centris, he finally made progress in coming to terms with many of his psychological issues, confronting his own fear of being useless and a burden. He realized that he does have something to offer as a Starfleet Officer.

Commissioned an ensign, Maxwell was assigned to the USS Gibraltar temporarily while the Triumphant was undergoing repairs.

Stardate 237705.05- Was awarded Cambridge's Certificate of Advanced Study in Mathematics and conducted post-graduate research with the Subspace Cosmology Array Group at the Cavendish Laboratory.

Stardate 237807.21- Accepted to Starfleet Academy. While as a cadet he published a series of papers in the Daystrom Institute's journal Anomaly, earning him a nomination for a fellowship in the Royal Society.

Stardate 238206.12- His doctoral thesis ("Schlezholt's Theory of Multiple Big Bangs and asymptotic AdS(5) X S^5 spacetimes independent of past or future singularities") accepted, he received his PhD in theoretical and astrophysics.

Maxwell Spinrad's Exoskeletal gravity support unit or G-Suit allows him freedom of movement in earth normal gravity. The project of Dr. Alyssa Chui and the cybernetics team at Starfleet medical, clinical trials began at stardate 237902.16 while he was a first year cadet at the Academy, and he was identified as a prime candidate for the experimental technology.

A Bose-Einstein Condensate quantum processor chip was implanted into the agranular frontal area 6 adjacent to the primary motor cortex in his brain, allowing instructions from his central nervous system to the motoneurons in his muscles to be read and interpreted, and carried out by the exoskeleton itself. The harness is composed primarily of duranium and fullerine hyperdiamond. A control pad on the front of the torso section allows the unit to be powered on and off, and an access port enables the G-suit to be connected to a tricorder where it can be programmed or recalibrated. Powered by sarium crystal power cells, it has six gyroscopic stabilizers and has a gravitational, pressure, and infrared sensor on each axis point to sense and respond to the environment around the wearer.