From 118Wiki
(Redirected from Soul, Michael)
Jump to navigation Jump to search 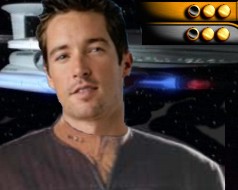 Although Michael was not the modal student at the academy he did do enough to finish the training in the middle region of his year and soon realised that he had a nature aptitude for flying.

Michael enjoys flying when ever he can get the opportunity, whether it be a shuttle of a capital ship. Michael also still revels in a good fight and will often go to the holodeck and engage a opponent in unarmed combat to let off some stream, however michael is always careful not to let his violent side take over in his everyday life. Off duty Michael is very laid back and enjoys and joke and a drink with most of the crew, on he is as professional as he can be.