From 118Wiki
(Redirected from Sorani, Luran)
Jump to navigation Jump to search

Lieutenant Commander Luran Sorani, an Al-Leyan, is currently the Mission Specialist aboard the USS Avandar.

Sorani is settling in and getting to know the crew of the USS Avandar but already she is fond of Jack, Alleran and Nearian. She was re-united with an old friend S'Lone who seems to enjoy pushing her boundaries and trying to expand her way of thinking.

Sorani has not experienced any lasting romances. Her species only comes into season every few years and it generally lasts 4-8 days. Younger Al-Leyans are not as mature and have shorter seasons. They tend to mate with different partners and may not keep in touch with a mate after the season ends unless conception occurs. As they grow older and mature they have longer seasons and learn the value of companionship, many settle down with a mate and the companionship can last anywhere between a few years to the rest of their natural lives. 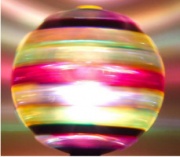 Lieutenent Commander Sorani was suddenly reassigned to the USS Avandar after the ship lost it's Chief Science Officer Lieutenant Commander Evanna Blackwood. Another ship was destined to go through the wormhole and take over a delicate situation so it was a race to catch the USS Halo and the trio of runabouts before they got there. Upon arrival at the USS Halo, Sorani was immediately tasked with helping the ship's Chief Medical Officer develop a cure for a degenerative disease infecting the colonists of a small planet. She was disapointed that she was unable to see the project to it's conclusion as she was sent on one of the runabouts to transfer to her new ship, the USS Avandar before the cure was finished.

Sorani recieved a mixed welcome from the crew who were still grieving for their former chief. The Klingon Marine CO, Captain Kagran, was the most hostile but it wasn't altogether surprising. The cold war between their people had been over for a number of years but it would take a lot longer for the hard feelings and hostility to heal. There were a number of people she looked forward to getting to know better such as Alleran Tan the operations officer who gave her a warm welcome and Nearian Ben'thal a science officer, also new to the ship. There was an unpleasant surprise, in the form of "Rik Fabre" a Ferengi hologram with his disco ball of doom, from an "old friend" tr'Khellian, the intelligence officer. Sorani is used to adhering to particular rules governing social behaviour and was left confused and upset by the incident, which brought tears to her eyes. Sorani later cornered tr'Khellian in the turbolift and told him exactly what she thought of his "welcome".

Dancing in the Void 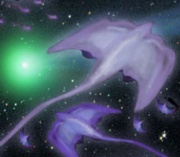 Sorani and the team had their hands full studying a comet that contained an unidentified gas and the previoulsy unseen cosmozoans that it attracted. Sorani had Ensign Nearian Ben'thal go on the away team down to the comet to investigate what was some strange form of archives and tasked resident chemicals expert Ensign Dominic gray with studying the strange new gas. Meanwhile she worked with Dr Jen Malcolm and Cadet Gina Es-Aleh to study the new lifeforms.

At one point they thought one of the creatures might be injured and they worked hard to study and compare the beings physiology. Eventually it was concluded that the creature was simply an elder of it's species and possibly dying. There was some amusement to be had from what appeared to be a pup of the species as it appeared to play with the probe sent out to gain data. When the pup appeared to eat, or chew the probe the team began to worry about the wellbeing of the pup but they didn't have to worry long as another member of the pack appeared to signal to the pup, which then spat the probe out again.

It was a real treat for Sorani to be able to make new discoveries with her team and much of her previous work had been further study and advancement of much more everyday things. Her quick thinking and reactions were soon called into action when a situation broke out down in the hazardous materials lab. The unknown gas which Ensign Dominic gray and Ensign Chris Davies were studying breached several layes of high level containment meaning that Sorani had to make the difficult decision of purging the room of all it's air, effectively leaving two staff to suffocate. Sorani made the call however, forcing herself to think of the needs of the rest of the crew whilst Dr Jen Malcolm prepared sickbay to recieve the two patients. Fortunately Both Gray and Davies made it and recovered without any permanent damage. 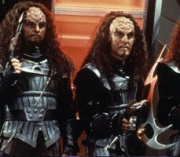 Klingons preparing for their attack.

The Klingon invasion brought mixed feelings for Sorani. Her people had been involved in a cold war with them for a long time and relations were still strained. Neither party had managed to gain the upper hand, so the Klingon invasion meant that her people came under a little less strain as the Klingon's tried their luck elsewhere. Sorani knew what it was like to be under constant pressure from the Klingons and sympathised with the Romulans. Having had a good friend who was part romulan she didn't have quite the same natural dislike and distrust for the species as many other humanoids seemed to. She felt that while much of the Romulan population was every bit as slippery, cunning and ruthless as they were reputed to be she also believed there were plenty of better people in the general population who just deserved better. Sorani knew with the Hobus star going supernova and the destruction of Romulus that the Romulans were already having it bad enough without the Klingon's capitalising on their misfortune. Sorani and indeed the rest of her people knew who they were rooting for. They wanted the Klingons to come out of this conflict wounded as it would help them stave off the Klingons for good, but not so wounded that the romulans would be able to take their place.

Sorani had been set to lead an away team for the first time. On Azure station there hadn't been much need for travel outide of the local systems that she was familiar with. This had the element of the unknown, and even though it was less than ideal circumstances tt was a great opportunity that she prized greatly. She wanted to show she had the ability to lead and make those quick decisions under pressure. However, when the ship came under fire and was rocked about by the blows, a freak accident incapacitated her. She was able to recover fully but by the time she was able to return to duty the entire mission had progressed without her. To add insult to injury, she was assigned a new role and initially feared it was punishment or a sign that the Captain had lost all faith in her ability to lead a department. After talking with her mentor and seeing the counsellor Rune Jolara she began to feel more comfortable with the move.