Difference between revisions of "Sobok" 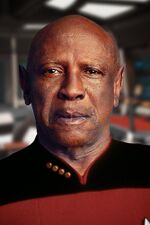 Sobok has dedicated most of his life to Starfleet. Taking away the family's crude properties and its position in local politics. He was, however, a prestigious Starfleet Captain, notably his continuous service on the Excelsior class ship USS Elcano, where he spent most of his career, being the only Captain to have served on the ship throughout her service.

During the last 20 years of his career, the Captain and the Elcano were recognized for their role in training future Starfleet Captains.

Sobok retired at an advanced age in 2387. Since that time he has helped different levels of the Federation's diplomacy, always in an advisory position.

His youngest grandson, Sirok, has followed in his path in Starfleet and uses the experience of the retired Captain to try to be a better officer, especially in dealing with beings who do not follow logic.