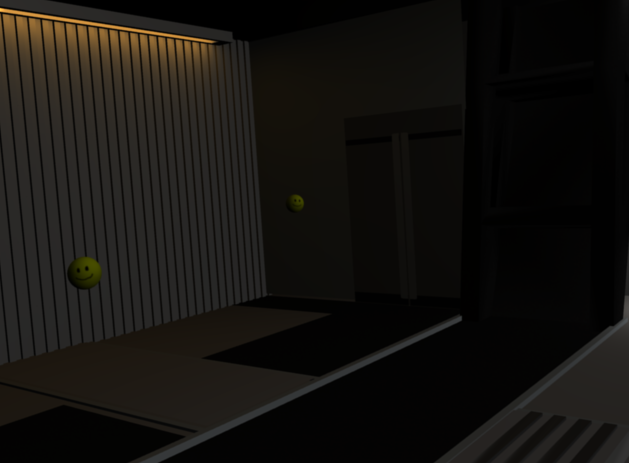 Smiley is a term affectionately given by Kevin Breeman to describe entities which spontaneously evolved while he was absent from the USS Independence. The smileys, which Kevin has named Eight (formerly NaniteA22) and B(formerly NaniteA23) are about the size of a human fist and are capable of floating in the air. They chose the appearance of smiley faces in order to set what they then thought were massive emergent meta-entities composed of organic nanites at ease.

While on his first mission, Kevin used nanites to caulk the bulkheads of the USS Independence-A in order to protect her from the effects of extonic radiation. However, an engineering cadet was adversely affected by inoculations against the radiation. Effects included paranoid delusions in which Kevin's nanites were actually a part of an elaborate conspiracy. So, Cadet Klaar elected to reset the programming of the nanites. She was sedated but not before she could disable the evolutionary inhibitions on several of the nanite colonies.

The following sim extract gives an indication of what took place as a result of the rapid submicroscopic evolution that ensued after Klaar's damage.

NaniteA23: =^= Of course I can! I'm connected with colony AF57T, piggybacking off of its distributed processing capability. I'm a meta-entity.

Eight was responsible for clearing out main engineering of nanites that had been taken over by Cadet Klaar's reprogramming. 8 also helped Kevin troubleshoot issues involving a Klingong De'Wi' AI that Patri Jia Kom infiltrated aboard the USS Independence-A.

B was responsible for disarming a self destruct aboard the USS Phoenix while she was at the other end of a way corridor at Odyssey Station.

The implementation of artificial consciousness is not a new field, nor is the antiquated conception of consciousness as an epiphenomenon stemming from stochastic processes. However, I should like to point out that 8 and B, my two test subjects, were in fact phenomena which arose out of a chain of mishaps aboard the vessel on which I serve.

During a mission to Science Station 7623, an avian engineering cadet's anti-radiation inoculation apparently compromised her perception of reality to the point that she believed that a nanite culture which I had deployed in order to seal sensitive sections of our vessel against the region's extonic radiation was in fact part of a subversive plot. She thus proceeded to reprogram some of the nanites in order to stop this plot and was subsequently incapacitated while medical investigated her condition.

Before my return from an away mission, numerous patrol and managerial units of the nanite colonies began to send control signals at pseudo-random intervals. Several main control nodes in the colonies then started to develop more advanced fuzzy logic circuits. Finally a standard 2-army solution executed in colonies A22 and A23 in an A subs grid control group, at which point a cascade reaction occurred giving rise to a gestalt-like self awareness in both colonies. Emergence of homunculi proceeded apace to the point that both A22 and A23 were galvanizing nanites to become part of physical superstructures, or bodies.

The 2-army solution acted as a kind of chaotic attractor, causing the systems of nanites under the control of A22 and A23 to coalesce into coherent states. These states follow a fractal pattern, in that they implement goal directed behaviour which, at its core, is motivated by a recapitulation of the themes of individual nanite programming:

Preserve the self. Do no harm to living entities.

However, this goal-directed behaviour has been seen to waver. For example, B was responsible for assisting myself during a recent away mission, in spite of danger to himself.

Whether or not 8 and B are themselves aware that they are implementing recapitulated nanite programming is unclear. Indeed, the two may be akin to adolescent humans unaware of the functions of their rapid bodily changes and emotional urges.

Time in the Daystrom Institute

The smileys were studied by the Daystrom institute and 'house-trained' by Doctor Cameron Rayans. Their lack of discipline in the past was trained out of them.

Service Aboard the USS Ronin

The Smileys were assigned to the USS Ronin as auxilliary repairs and AI research devices.

Service aboard the USS Victory 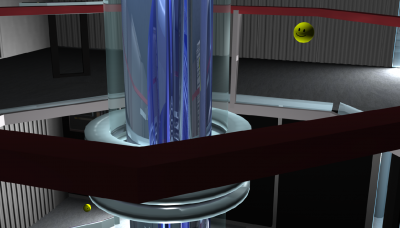 8 and B sneak into engineering to take a look around.

The Smileys ended up surreptitiously deployed to the USS Victory as among Kevin Breeman's personal effects. Currently they are acting as auxilliary task automation machines.