From 118Wiki
< Sigarus System
Jump to navigation Jump to search

Sigarus III is a class M world that is very wet world with the majority of the planet covered in swampland.

The Sigarans are an amphibious species that somewhat resemble tropical frogs of early earth era. They are extremely tribal and though only considered a C on the technological scale, due to contamination and interference by the Son'a in 2374, the Sigarans are armed and understand particle based weapons. They do not have space capability, but Starfleet chose to continue contact due to the contamination.

They have been very open to an alien presence and consider it a gift of the water spirits that “star dwellers” wish to help them achieve eternal life in the cycle. They have not complained about the minimal contact by Starfleet nor the limitations of technology provided. Starfleet Directive 2378-02-Hash-4 modified the prime directive in the Sigaran case by stating that assisting them in the development of technology in a limited advisory capacity was allowed. They were provided a subspace transceiver and working knowledge of their particle weapons to help them maintain the balance their society has adapted to.

The Sigaran adoption of technology while remaining tribal is considered unique among exo-anthropologists as most societies drop their primitive status when technology is invented or introduced. The Sigarans have absorbed it in to their world, but have continued to remain close to nature and their old ways.

The largest threats to planetary inhabitants by animal life are the Akaborak and the Infidora. There is also a danger posed by existing pathogens and all members who visit the planet are recommended to receive a full range immunization boost every 72 hours.

Akaborak are large, crab like creatures that inhabit the deeper parts of the swamps. The creatures are to believed to have evolved among the rocks and minerals on the planets surface, incorporating them in to their armor. This has created an issue that Akaborak shells are able to resist particle and phaser fire by fracturing the beams. Their shells are immune to particle weapons and immune to all by high energy tactical phasers. Their heads are the weakest points and Sigarans have become expert marksman to kill these creatures. 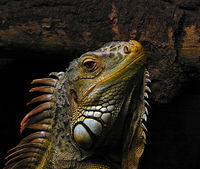 Infidora are extremely quick and powerful lizards that get over 15 feet long and five feet high. Though not as common as Akaborak, they are considered top of the food chain, their jaws so powerful that they can crack the shells of the Akaborak. Starfleet estimates their jaws are strong enough to shred the standard duranium hulls of shuttles.