From 118Wiki
< Shedet
Jump to navigation Jump to search

Shedet was born on Orion in Capital to her parents Mikral and Eshen. Due to her genetic mutation, Shedet was born with blond hair and blue eyes instead of the typical dark colors associated with their species. In Orion society, she was the antithesis of an Orion woman and only lived outside of childhood due to being a more civilized time.

The girl was fed and taken care of as far as was required by law, but she was not allowed to leave the house unless needed, nor was she allowed to show herself when guests were visiting. Shedet spent most of her early childhood drawing, playing in the back garden, and later reading anything she could get her hands on when she learned to read.

Around the age of eight, Shedet learned that her parents were planning to send her to the Silent Commune in the Dralask Mountains. It was a place where misfits and petty criminals were sent to be taken out of society and under the iron rule of the prioress that ran it.

So, that night she backed the only things she owned, her PADD, her stuffed Keegar (an ordinary mountain cat found on Orion), and fled into the night. She lived as a street runner with a small gang calling themselves the Rejected. Shedet stayed with the gang for two years, exploring most of the sprawling Capital City structures, and this became an advantage when the Rejected wound up on the wrong side of the law. Mass arrests across the city happened to capture many of her friends who had become family. Being one of the few brave enough to enter the lower subterranean sewer channels, Shedet avoided capture.

Shedet made her way to the city of Tempesta, where Maea, a co-owner of a small hotel and found Shedet filthy, starving, and terrified. Maea immediately took Shedet in, knowing full well why the girl was on the run. Shedet's dirtying of her hair could not hide the fact she was a pariah in Orion culture. For six years, Shedet stayed with Maea, learning about business, helping clean rooms, and finishing her education through a home school program. 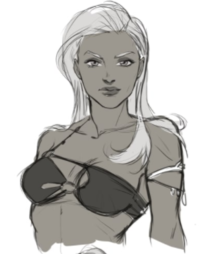 When Shedet was sixteen, she met Ishiv, a Matron and member of the Stardust pirate cartel, who took a liking to the blond Orion and offered to take her on as a maiden. Under Ishiv, Shedet was trained in the art of gishule, the art of manipulation and control.

Following Ishiv to Tempesta, the blond Orion spent her time as an exotic dancer at Gufo's Enchanting Emporium, entertaining the tourists that flocked to see the culture and people.

In the five years under Ishiv's tutelage, Shedet discovered her love of computers and trained her programming and hacking skills. This got the attention of Culdor Cretch, a Rodulan who worked for the Pharaoh Cartel and commanded the Fame and Fortune. As much as Ishiv tried to persuade Shedet otherwise, the blond Orion believed this was the way to get off of the planet and to seize her fortune.

With a letter of introduction as the Stardust Cartel that Ishiv was part of had an alliance with the Pharaoh Cartel, Shedet took the cartel's mark on her thigh and was placed aboard Captain Cretch's ship. Unlike other Raiders, Captain Cretch preferred bloodless crimes, so his crew was tailored for quietly taking freights, hacking bank accounts, and scamming those who were gullible. The Crime Boss over the space did not care as they got their cut of the money, and it paid the dues.

Shedet's piracy days came to an end only after a year when the Fame and Fortune were captured when a Federation cruiser surprised them in the middle of a heist and seized the ship. It was Shedet's quick dispatching of a custom virus that messed with the Federation ship long enough for some of the shuttles to escape. Shedet, herself, escaped by using her skills to mask her signature and stay within the many crawl spaces of the old Orion Brigand Class cruiser. Only about 33% of the crew escaped, and Captain Cretch and the command team were captured. Shedet was able to sneak off when the ship was docked at Starbase 313.

She was able to hitch a ride with a Gorn trader by the name of Morg, who took a liking to her and taught her the trade of a merchant. Shedet discovered abandoned ruins on a moon and the Obsidian "Singing Stone" on one of the trade missions deep into unknown space. She connected with it and got a glimpse of a race called the Archaic Ones.

After speaking with Morg about it, she decided that the only way she would learn more and gain access to the resources would be through Starfleet. With Morg's help, she applied, was accepted, and went to the Academy on Earth.