Lt jg Katherine Sharkey, a Terran, is currently an engineer aboard the USS Independence-A. 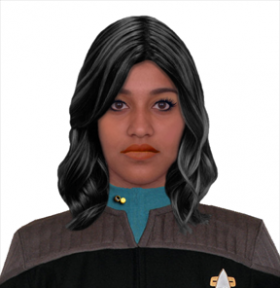 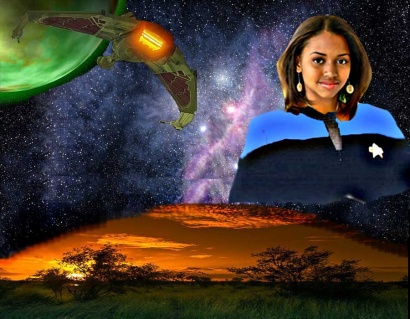 After both the death of both her biological parents after birth, Katherine was raised by John and Mary Sharkey. The Sharkeys were missionaries living in Tanzania. She took the name Katherine in honor of her adopted mother's middle name.

Katherine is an extremely attractive and gifted young woman. She constantly feels like she is purposely overlooked by Darius Clack when an important task is at hand.

Her strange association to Darius Clack has done plenty to fuel conspiracy theories in her direction. It has been hinted that the two are secretly married and have been for over ten years. Details range, from Katherine's intended husband being murdered by Clack to Katherine coming into Clack's possession as a result of a sword dual. The two's involvement with factions that threaten the safety of the Federation cannnot be denied in any case.

Katherine spent a lengthy amount of time onboard the Saint Vitus' Dance, a convert Klingon Bird of Prey under the command of Captain Ernest McSorley. What took place or her position on the ship is unknown at this time.

The following are a few selected sims which are selected for their importance to character development.

The Wachagga are a race of people who live across the mountains, far to the west of Mount Kilimanjaro. They are a stout, straightforward people who live practical and simple lives. They have managed to retain their traditional lifestyle by isolating themselves from the outside world. Although visitation and free trade is allowed, they don't consider themselves part of Earth's Federation Government.

It is said that the Wachagga arrived first on the plains, from lands beyond the sun, refugees from an eternal war in which they were but pawns. There are rumors that the land they came from was another realm of existence entirely because of the innate ability of the Tribal Elders to manipulate the physical elements of the world around them. All Wachagga have scales colored symbolizing their tribal element (Red for fire, Yellow for Lightning, Blue for Ice, and Green for Earth) around their eyes and down the side of their face and neck.