Historical and Archaeological Specialist on the USS Eagle.

Delinda was born in the city of Dallas on the North American Continent of Earth. Her childhood was happy, though she often missed her mother who would be on transport runs. When Delinda turned six her family moved to Sector 64 to operate a small trading company.

When Delinda was twelve years old she was going with her mother on one of the trading runs. The shuttle crashed into a Class O planet. The two Sharee women were eventually rescued. A little over a month later Etilda Sharee was paralyzed by an infection in a wound on her back.

The family then returned to Earth. Delinda’s grandmother helped the family through the transition of Etilda’s recovery. It was at this time that Delinda was also treated for PTSD, an event that would spark her interest in psychology.

When Delinda was 17 she left for college. She went to Paris to study psychology. In her time in Paris a love of the arts was sparked in Delinda. She learned to play the flute during her time in college. Her teacher was Leopold Gerard. During her time in Paris their relationship blossomed into a love affair. Sadly the relationship ended the day Leopold proposed to Delinda. She felt obligated to decline his offer of marriage as she was bound for Star Fleet academy and she did not feel he would be happy outside of Paris. She still plays to this day, finding the music, and the act of playing to be relaxing, and a reminder of simpler times.

After graduating with a degree in psychology Delinda went to San Francisco to attend Star Fleet academy. There, she not only expanded her studies of psychology, with a Masters degree, but also received the more militaristic training required of a Starfleet officer. After graduating from the Academy she was assigned the Operations crew of Starbase 118.

Since her assignment to the crew of Starbase 118 Operations Delinda found the adjustment to active duty to be more difficult then expected. Upon arrival to the Starbase she quickly found herself with a phaser rifle in hand, assisting the security teams in an assault to retake the gala hall, and free the command staff. Needless to say Delinda tried her best, but was soon knocked out by a blow to the head during the assault.

Later she found herself on the planet Esogunot to aid in the peace talks between the Auron and Gargon races. A last minute plea to the prince of the Gargon's by Delinda sparked the final effort that finally brought peace between the two races.

In the meantime Leopold Gerard has followed Delinda to Starbase 118 in an effort to win her back. Unfortunately a series of unfortunate encounters has only driven the two farther apart. Complicating matters further, Delinda has found herself with a bit of a crush on one of her fellow officers.

During a mission to planet SQ313 to save a group of Ensigns, Delinda was marked with a slave tattoo. The away team was moving through town disguised as a locals, this was when a Breen attacked her, marking her face. The mark imprinted at a genetic level making removal extremely difficult. Delinda is not willing to take the risk of the procedure, so she struggles to live her life with this reminder of what happend on that day. This incident was a massive violation to Delinda, and she often tries to hide the mark that was left on her left cheek.

As First Officer Delinda was participating in a set of war games. During these war games half the crew was believed to have been killed in a engineering accident on an old derelict ship. While investigating whether or not the crew were still alive Delinda was caught in a massive psychic call for help, at the same moment Cyrus Webb, a powerful telepath, was in contact with her mind. As her mind was unprepared for this level of psychic contact she fell into a coma. Upon awakening she reported horrible life like dreams while she had been in the coma. She also found herself with a telepathic connection to Cyrus Webb.

As the Klingon Empire once again contacted the Ops crew for aid with a lethal virus, Delinda was moved to the role of Ambassador given her unique skill set, and diplomatic experience as a former counselor. 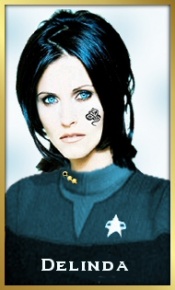 -238609.27 Transferred to USS Eagle as Historical and Archaeological Specialist