Lieutenant Seta Jinean is a Bajoran Counsellor, currently serving aboard the USS Excalibur-A. She specialises in neuropsychiatry and meditation techniques.

Jinean was born in late 2365. She was the second of three children, and into a comperatively religious Bajoran family. She was quiet and obedient, but outgoing enough to make friends easily. Well-liked and well-grounded in her faith, Jinean enjoyed a pleasant childhood which, to this day, sets the status quo and shapes her perspective and outlook on different matters. The young girls life was uprooted in 2379, when her parents split up, and Jinean stayed with her mother Beelea, while her siblings stayed with the other parent. In an attempt to win her daughters favour, Beelea’s parenting style departed from the previously firm set of structures and rules.

Unsure what to do with her newfound freedom, Jinean developed into a somewhat rebellious teenager and was quickly known for always getting herself into trouble, though there was never any malicious intent behind it.

It was somewhat surprising that, in 2384, Jinean (then calling herself Gin because it sounded better), finished her education with excellent grades. Upon discussing her wish to leave Bajor, Beelea suggested to consider joining Starfleet. Unsure if she would fit into such a structured organisation, Jinean decided to participate in a preparatory course. To her surprise, the structured but accommodating nature of Starfleet was something she quickly took a liking to. While she failed her first entry exam, Jinean began her formal education as Counsellor in late 2386, and finished it four years later. 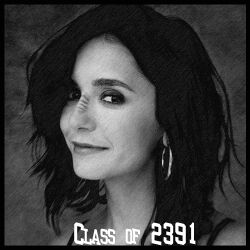 Jinean's first ship was the USS Helsinki - a small vessel with only 150 souls on board, and with only five counsellors on staff. Competence and a genuine interest in others’ welfare earned her a quick promotion to Lieutenant Junior Grade after only a year of service. Having gained the senior staff’s trust, an advisory position on the bridge was added to Jinean’s schedule, and the added responsibility and importance was something the young Bajoran thrived in. Her advice on intercultural conflicts was crucial in the dispersion of a potentially deadly situation, and she was promoted to full Lieutenant.

What seemed like a stellar career was, retrospectively, perhaps a little overwhelming. In 2395 she started providing counselling sessions to Lt. Cmdr. Aldris, the USS Helsinki’s First Officer, who struggled to come to terms with a away mission that had gone cost the lives of several officers. Despite the nature of their relationship, the two of them began an affair. While both were well aware that such a relationship would need to be reported, they opted not to do so, and it was discovered, Jinean was demoted to Lt. JG and Aldris was transferred to another vessel.

It wasn’t long after that Jinean discovered that she was pregnant. Unwilling to end the pregnancy, she decided on a leave of absence, and her daughter Leothera was born eight months later. When the little girl was just about old enough, Jinean decided it was time to return to Starfleet - this time without ruining her career. The following two years saw her working as neuropsychiatric researcher aboard the USS Saint Raphael, where she regained her rank of Lieutenant.

In 2399, she was transferred to the Excalibur-A.