Difference between revisions of "Serala"

"The strongest tactical move is always the one in which you reap the highest gain at the lowest cost. Going out with phasers firing may seem heroic, but in the long run it is merely foolish. Retreat is often the best possible option."

- Some Vulcan guy from another Intrepid class starship.

Lieutenant Commander Serala, a Half-Romulan/Half-Human female, is currently serving as the Strategic Operations Officer aboard the USS Atlantis, NCC-74682.

Serala became life-bonded to her new husband, Stevok of Vulcan, when he found her swimming in the pool of a waterfall while she was on shore leave at Lydor IX where he was working as a xenobiologist for the Daystrom Institute. Stevok had just begun his first pon farr and Serala, unaware and rebounding from a perceived unrequited love, fell for him. The next morning, when she woke up in her tent, she found the bond in place. Ever since then, Serala has developed a love for her husband that goes far beyond anything she ever imagined possible, even beyond what she felt for her previous love. Serala is expecting her first child. However, sadly, Stevok was recently murdered by a delirious victim of a mysterious affliction. 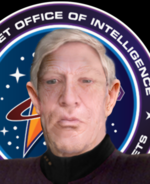 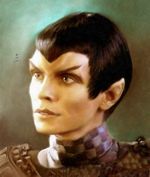 239702.01 Stevok is brutally murdered leaving Serala a widow while expecting her first child.

Serala tends to be reserved outwardly due to the incessant harassment she suffered from human children when she was a child. This has caused her to be suspicious of people until she gets to know them. The greatest tragedy of her life so far has been the death of her father which left a hole in her heart that has yet to be filled.

One of Serala's strangest quirks is her tendency to slip into Romulan when stressed, but she is aware of this and monitors it to the best of her ability.

Due to her Romulan physiology and her upbringing in Bogata, Serala has an intense dislike of the cold. A fact that is sure to cause her problems during her time in Starfleet.