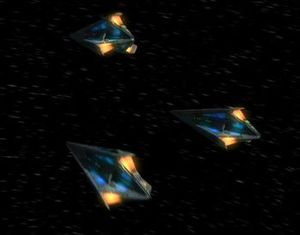 Upon entering the system, the two Starfleet ships were soon attacked by Tholian vessels, but further investigation showed that the vessels were being controlled like drones, with no Tholians aboard. In addition, an alien probe breached the hull of the Veritas to gain access to its computer core, temporarily disabling the ship's engines. The USS Solaris was soon destroyed, although most of its crew managed to abandon ship. Upon regaining control of her engines, Veritas quickly rescued the Solaris crew before encountering another Tholian vessel, this one already badly damaged. After a brief battle, the Tholians communicated with the Veritas crew and informed them that they had been attacked by another Starfleet ship, apparently also having been turned into a drone of sorts by the unknown alien AI defense system.

Having abandoned their ship, the Tholians were placed aboard Veritas as guests and a temporary truce formed as both crews attempt to find and disable the AI defense system behind the attacks.