Scotty was born on Stardate 236610.29 to Felix and Amelia Reade. Scotty was raised in a small family. A few years later his younger brother Sam was born. From a young age, Scotty always was keen in technology and engineering. Scotty’s dad Felix was a Starfleet officer, because of this he was always traveling to where his dad ship was posted. Scotty wanted to join Starfleet from a young age.. His dad came back from a mission and the ship was having a scheduled repair at the Spacedock. Due to this timing, Scotty’s mother Amelia took both Scotty and Sam to Luna to meet their dad after a 2-year deep space mission. This was the first time he visited a Starfleet vessel was at the age of 10, the first ship he was assigned to was the USS Vancouver (NCC-59955). He was the Chief Engineer of the USS Galway for over 2 decades. After seeing the ship, Scotty knew that he wanted to join Starfleet when he got older.

Wil Ukinix helped Scotty get settled when he first joined the Veritas. Scotty has respected Wil's leadership and mentorship as soon as he met him. Wil has always been opening into listing to any ideas that are thrown at him.

Ikaia Wong Since participating in the Battle of the Shoals, Ikaia and Scotty have become close friends on the Veritas. Currently, Scotty is helping Ikaia build is EMH. Currently is Scotty's roommate on the Veritas

Hannibal Parker has helped Scotty with a request he had after his first mission, he wanted to get some more hand-to-hand training. Have been friends since. 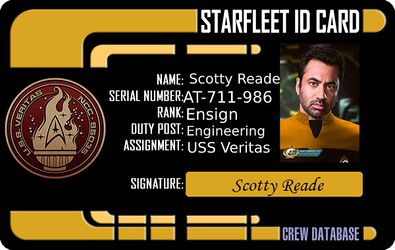