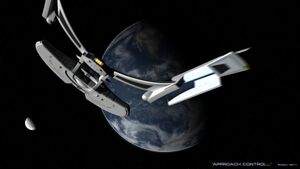 The SSWildfire is an ex-Starfleet Akyazi class starship, the former flagship of the pirate Henley Marths. It was accompanied by it's smaller sister ship, the SS Rampart which was used for raids and quick boarding actions.