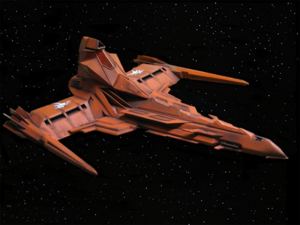 The SIRC starfighter, the primary "weapon" of the Valcarian Imperial Navy

The Republic Ard'is Systems (RAS) Single Ion Reactor-Coil starfighter, also known as S.I.R.C. starfighter or simply S.I.R.C., was the forerunner of the Imperial SIRC/ln starfighter and its variants, created prior to the Vodran Wars as part of a drive by the Republic Navy to standardize their starfighter capability and create fighters that could deploy in the limited space available aboard existing warships, like the Rhionin-class and Fyris-class cruisers.

The origins of the S.I.R.C. design with its dagger-shaped cockpit flanked by horizontal wings can be traced back to a courier design produced by Romin Ard'is' Ard'is Design Systems (ADS), although this was a large, sophisticated runner rather than a compact, mass-produced starfighter.

The next stage was the Advance Projects ship, a starfighter prototype which Ard'is was developing. Designed to escort cargo freighters on the outlying territories for corporate clients, these fighters were built to deploy into combat from tight-packed launch stacks in ordinary cargo-holds. Visually, they abandonned the wedge-shaped forward hull of the courier, and had broad horizontal vanes giving it a twenty-meter wingspan, and a compact, dagger-shaped crew-compartment in the center: the essence of the S.I.R.C. design had arrived.

It would be another seven years, however, before Ard'is revealed the final component of the S.I.R.C. design, the Ard'is Advanced Systems Single Ion Reactor-Coil Engine, or ARD-SIRC, a powerful and highly-innovative propulsion unit which was officially endorsed by Republic Ard'is Systems shortly before the Seige of Kintan and the outbreak of the Vodran Wars. This paved the way for the final starfighter design, and it meant that Republic Ard'is Systems were well-placed when the Republic called for a new, standard mass-production starfighter during the Vodran Wars. Although the new engine design was incompatible with established warp, life-support and shield systems, the S.I.R.C. was incredibly cheap, insanely fast, and could stack tightly in converted cargo holds or external launch-racks aboard the Navy's existing line-combat ships. By the first weeks of the New Order, S.I.R.C. fighters, already known to front-line personnel as "SIRC fighters", were deployed aboard ships, such as the Morovin-class Destroyers.

It may have been the ability to give a fighter capability to ships like Rhionins and Fyris that ensured that the S.I.R.C. won the design contract; but at the same time, it can be noted that Pranthe Systems Engineering's rival designs, the Kolit-class interceptor and Trondir-class Orbital interceptor, looked suspiciously like knock-offs of Ard'is' technology and designs by their leading corporate rival. Although these rival craft gained fame during the Vodran Wars, they disappeared from sight in the years that followed, and Ard'is bought up the remnants of the entire production series from Pranthe.

By this time, the original S.I.R.C. was evolving into the SIRC fighter, the dominant starfighter of the Empire, and although SIRCs proved vulnerable to shielded and superluminally-equipped Vodran fighters during the War, the design proved to have immense capacity as a platform for modification and upgrades: advanced variants of the basic S.I.R.C. technology, such as the SIRC/I and SIRC/Ad would still be among the most potent and capable starfighters in the galaxy fifty years later.