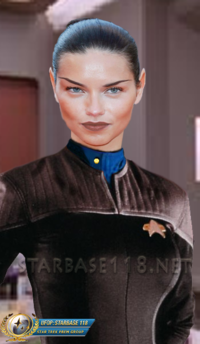 Summons from a counselor was not what Tu'Peq was expecting. He did, however, have a rough idea of what it was she wanted to talk about.

Sindrana: =/\= Greetings Ensign. I have been made aware that you have not been seen by a counselor since your arrival on board the Blackwell. Perhaps during the short time remaining on this shore leave we can rectify that situation? =/\=

If they were going to do this, he wanted to get it done as soon as possible. Like many Vulcans, he didn't like the idea of speaking to a counselor; their job was literally to explore an individual's feelings. It was a job that, for a Vulcan, seemed at best superfluous and at worse, humiliating.

Sindrana: =/\= Understoond. I am in the officer’s lounge now and it appears to be quite empty at the moment if that is conducive to the conversation. Or we can meet elsewhere? =/\=

Certainly not. There was absolutely no way that Tu'Peq would ever discuss with the counselor no doubt what it was that she wanted to discuss in a public setting.

He tapped his commbadge once to deactivate the previous signal and once more to have the transporter chief on duty beam him up to the ship. He had gotten so used to beaming up and down from the ship that the brief exchange of "one to beam up" was now simply muscle memory.

He wasn't paying attention to the world around him disappearing into a murky blue haze. Instead he was thinking about his impending meeting with Lieutenant Sindrana. No doubt, she wanted to discuss with the syndrome that Dr. Pond had discovered and how it made him "feel".

Well it certainly did make him feel things, that was why the doctor had prescribed him medication to deal with it.

Tu'Peq had finally arrived at the counselor's office and he made sure to collect himself before pressing the door chime.

With the counselor permitting him entrnace into her office, he walked in, the door parting with a quiet hiss. He didn't look around the office at all, didn't notice any of the decorations, any of the furnishings, didn't even notice the colour of the carpet. Was there even a carpet? Was the carpet of a different colour than was standard issue? He didn't know, all he knew was that he wanted to get this meeting over with as quickly as possible. To that end, he stared at one thing and one thing only: Lieutenant Sindrana.

Tu'Peq: Good day, Lieutenant. It is agreeable to see you again.

Straight to the point, no messing around. He knew that he didn't want to be there and, if she was worth her salt as a counselor, she knew it too.

Tu'Peq: Counselor, if I may be ::looking for the closest human approximation to the term he wanted to use.:: blunt?

Tu'Peq: I know why you called me here.

Tu'Peq: You called me here because Dr. Pond discovered I have a neurological disorder which, when I am under stress, can cause audio-visual hallucinations. And ::he paused, wanting more than anything to not say what he was about to,:: impedes my ability to control my emotions.

Dr. Pond didn't tell her anything? How could he be so wrong? He rubbed his temple with his right forefinger, it seemed that he was starting to come under some stress right now. He wouldn't administer the hypospray, of which he always kept one on his person now, until some symptoms started to show themselves.

On the bright side, it seemed that Dr. Pond had kept her word to him and not spoken to anyone about his condition. A most honourable action, especially for a human.

Tu'Peq: Very well, shall we proceed with this session?

Seeing as he seemed to have spilled the beans, he was now much more relaxed and, dare he say it, composed. He sat back in his chair, waiting for the counselor to continue and willing to be here as long as it would take.