::When everyone was settled, Toni got up and refilled her coffee cup, then returned to stand at her chair, pressing the button to bring the view screen up from the table.::

::She inserting a padd, the image of a Reman. then she began to explain.::

Turner: Inquisitor D'veroux, a Reman and the Advisor to the Romulan Ambassador and Star Empire. He's a T4 Telepath.

::She changed the image to show an attractive Laudean brunette, then continued.:: 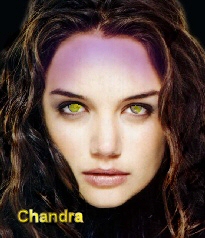 This is Governor Ahishma Chandra. She was once the Leader of the Naturalist Party on Duronis II, but became entangled with in a plot with D'veroux to oust the Federation from its Embassy on Duronis II. Unfortunately it worked, and the Starfleet officers were forced to leave.

Now, Governor Chandra has sent word intimating a willingness to talk to Federation representatives as she has some regrets for having struck a bargain with the Romulans. Seems they have not upheld their promises to her, and her power is in name only. Since then all the government officials with any power have either been assassinated or imprisoned. ::Toni looked directly at Ash:: Ensign MacKenna, will you give us an over view of what was indicated on the probes?

Turner: So there is no spaceport on the largest continent, nor any indication that the Laudeans are able to use the Sandbar? What about a Romulan presence there?

Turner: Could the Hirogens we ran into have anything to do with that?

::Toni took a sip of coffee to allow time for the others to make comments or ask questions.::

Turner: The Resolution is tasked to find out if the Laudeans wish for the Federation to return and help them to enter the UFOP. To accomplish this goal, I will be sending a team to Lokesh Island on Duronis II as guests of Chandra's at the Prime Minister's Mansion ( http://wiki.starbase118.net/wiki/index.php?title=Prime_Minister%27s_Mansion ) where she has taken residence. Lt. Commander Jaxx will lead that team. Commander, you will be taking Lt. Commander Aadi to help with Diplomatic chores, Lt. Townson for Security, and Ensign MacKenna has done such a wonderful job on her report, I'm sending her with you to do some fact finding.

Turner: Now, while Jaxx and his team are at the Mansion, the rest of us will also be fact finding by either by infiltrating and or observing in different parts of the planet to find out ingrainedined the Romulans are with the Laudeans. Some will be sent to infiltrate a known Romulan sympathizing terrorist faction in the Mountainous area. Others will be sent to a Laudean village known to harbor Rebels wanting to enter the UFOP. And the forth team will be going with me to the Embassy grounds and into Lokesh City.

Our goal is to find out how much support the Federation can count on if they were to re-establish the Federation Embassy and report their findings to Federation representatives back on SB185.

Turner: I was afraid someone would ask that... those three recon teams will have to be surgically altered so that we can pass for Laudeans. ::glancing at Dr. Deron:: Don't worry, Doctor. I'll help you with the cosmetic duresures. We'll discuss them later, but I think with the exception of Lt. Kora and Lt. Commander Polan most will be minimal with the facial coloring and special lenses for their eyes.

Lt. Kora, Ensign Unum, Dr. Lee, Lt. Commander Polan will be posing Laudean Rebels in the Village of Urdu on Govinda. The village near a known Rebel stronghold said to be somewhere in of around the Guyver Orchards.

::Downloading some information to their padds.::

Turner: We won't be leaving until next week, to give our injured time to heal, and I'll be available to answer any questions about the Laudeans from my experience with them. What I need you to do as soon as possible, is look over the information I just sent you, and choose a name. I chose a Celtic name, Bree. After you have done that, make arrangements with Dr. Deron or me to have the alterations done. Whatever name you choose be prepared to play the part to the hilt. Your lives may depend on it.

(OOC this is the information on your padds

Turner: Any questions? If not, you're dismissed.