:: Ayiana was joining an away team led by her new Captain of the U.S.S. Gorkon, Quinn Reynolds, to the damaged Starfleet science ship U.S.S. Tharsis. The crew of the ship had been driven insane by parasites, setting all sorts of devious traps. Quinn and company were trapped in a jefferies tube which had been rigged to fill with water. Ayiana has reluctantly volunteered to swim back the way they came in an attempt to find a way to drain the tube. ::

:: With the water flow slowed at the moment thanks to Cmdr. Eerie acting as a plug, they had a little more time to come up with a plan.::

Drax: We have to risk the other way. Although, it doesn't have to be all of us. Captain, it is between Lt. Sevo, Ensign Orrey or myself. :: He paused for a brief second.:: With that being said I volunteer to go.

Eerie: I don't swim. I sink. Anyways, a bit preoccupied right now. But, I could make good speed.

:: Very reluctantly, Ayiana summoned up some courage to get past her fears and spoke up. ::

Sevo: No. Y-you’re too big and slow to go swimming th-through the tubes for that switch. oO Yea, insult the Klingon. Smart move, Ayiana. Oo

:: Ayiana paused. She couldn’t believe she was about to do this ::

Reynolds: Can you swim?

Eerie: We need to do something. Even I can't hold forever.

Sevo: I-I grew up in a coastal city. I’ve probably swam m-more than all of you combined.

:: Her panic was steadily rising, but through some miracle of Starfleet training and indoctrination, her sense of duty to protect the her teammates and her Captain helped to overcome her anxiety. For now. ::

Reynolds: All right. ::She took a shuddering breath.:: Be *quick*.

:: Ayiana started removing her uniform, tossing them into the rising water. The heavy cloth of her tunic and undershirt would quickly soak up water and weigh her down. She also took off her boots and socks; it would be much easier to paddle and swim without them. Still decked in her uniform pants and grey tank top, Ayiana was ready as she’d ever be. She kept her tricorder and phaser attached to her pants, though; just in case. Starfleet engineering was remarkably resilient; most of their handheld equipment was waterproof. ::

Sevo: Did I forget to mention? Water polo in high school, and I was Top Ten in the 400 and 800 meters in my last couple of years at the Academy. oO Of course, that was a couple of years ago. And I’ve hardly had a chance to get in a pool since graduation! Oo

:: With a last nod to the captain, Ayiana submerged beneath the rising water in the tube junction and entered the crawl tube below the water’s surface, meaning it was completely filled by now. They had just crawled through this section, so Ayiana had a pretty good idea how long it was. From the team’s junction to the previous one was about 20 meters, and Ayiana could hold her breath underwater for 2-3 minutes (of course, that was back when she kept in physical condition for competitive swimming). :: 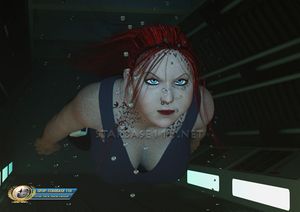 :: As she started swimming through the tube, utilizing a “dolphin kick” technique, Ayiana began to feel calmer. She had forgotten how much fun it was to swim. The city of Najana on Trill was a coastal city, so Ayiana frequented the beach and ocean throughout her childhood. Naturally as she entered the Trill equivalent of high school, she joined the swim team, continuing her academic aquatics during her attendance at Trill’s Starfleet Academy campus, eventually becoming rather proficient in diving and short-distance swimming. Sadly, after Ayiana graduated and was assigned to the Victory, her first Starfleet posting, she never had much time to keep up with the physical training required. ::

:: However, memories of her childhood in the water came rushing back as she swam on. None of her previous hosts swam as much as Ayiana did pre-Join, so this was one of her few skills she really felt was all her “own;” and not gifted by the Joining. In fact, post-Joining, her reflexes had increased, necessitating her to be reassigned to the Joined Women’s Division at the Academy; (an experienced swimmer with heightened reflexes gifted by a Joining could quite literally swim circles around an Unjoined, causing an unfair advantage in a straight-up competition). The negative side of the Joining, however, caused her lung capacity to decrease due to more oxygen and blood being needed for the Symbiont (essentially a second brain). More training could have restored Ayiana’s endurance, but she had graduated shortly after Joining and never had the chance to keep practicing. ::

oO Man, I forgot how much I liked swimming! If I make it out of this alive, maybe I should start swimming again. Oo

:: Ayiana reached the previous junction and praised the ancient Gods that there was still a pocket of air in it. The junction was a three-way with one tube heading straight on and another going vertically down. (The tube network the team was currently in actually went above the deck, next to the hull. )

:: Ayiana pulled out her tricorder and called up a schematic of the area. She wasn’t an engineer and didn’t really know where to look for a shutoff valve. Taking a look at the schematics only made it worse. ::

oO Oh great. These tubes weren’t designed to channel water, so of course there wouldn’t be a shutoff switch! Now what? The Captain is counting on me! Oo

:: She spent the next couple of minutes treading water, analyzing the schematics, looking for something - anything. The bottom screen of her tricorder showed the archived Oberth schematics, while on the top screen, Ayiana simultaneously did a scan of the area and compared the two. Here, her pattern recognition helped again. She was good at picking out obscure details - such as the line indicating a seal underwater below her on the live scan that wasn’t there on the schematics! :: (( OOC: Ayiana has a custom tricorder with the inside faces replaced by touch screens. ))

oO Someone sealed the tube! If I can break that seal, the water will drain down the shaft! Oo

:: Of course, she had no idea where all that water would ultimately end up, but for the moment, her team’s lives took priority. Ayiana replaced her tricorder on her hip, took one big breath, and dove back underwater. Swimming increasingly deeper was harder than swimming close to the surface. As the amount of water increased above a person, the pressure on their body increased as well, ultimately reducing lung capacity and altering blood flow. Ayiana only had a minute and a half - tops - before she would pass out and probably drown. ::

:: The “seal” was simply a tube hatch that had been closed; normally only closed in emergencies such as decompression. By the look of it, it wasn’t welded shut. If she could simply find the manual actuator, she could open the hatch and let the water drain. Of course, all that water rushing past her would sweep Ayiana down along with it, unless she could hold on to something. As Ayiana floated underwater, looking around for the actuator, her long, red hair floated freely in the water behind her like a forest of red kelp. She began to notice her vision starting to get blurry, and was having an increasingly harder time holding her breath. She had to act NOW! ::

oO Found the actuator. Oo :: Grabbing onto the ladder that ran the length of the vertical tube. :: oO And this looks sturdy enough. Here goes… Oo

:: Ayiana held on to the ladder with her left hand and reached for the mechanical, manual release actuator with her right. She tried to pump the actuator, but it hardly budged. It was hard enough to move the damn things without a ton of water pressure on top! She ended up having to use both arms. Finally after a few pumps, the seal began to break and Ayiana watched as her hair started twisting and turning around her, following the flow of water through the slightly-open hatch. She could also feel the water flowing past her. ::

oO A couple more pumps should do it! Oo

:: Indeed, two pumps later, the hatch doors violently retracted, and the full force of the water above Ayiana came rushing down. She nearly was swept away with the current as she managed to grab onto the ladder bars. Her legs had been pushed through the hatch, and Ayiana held with all her strength, trying not to be swept away with it. ::

oO Th-there goes the water! I hope that drained away from the rest of the guys! Oo

:: With her breath strained to the limit, Ayiana could feel her grip starting to slip. As the last of the water drained past her, Ayiana’s breath broke and she took in a lungful of water as she let go of the ladder. Barely conscious, and acting more out of a survival instinct than conscious thought, she managed to grab on again to some rungs a little further down the shaft. With a leg, she kicked open a hatch opening in the wall, climbed and crawled out onto the open deck. ::

:: Coughing out a lungful of water, Ayiana lay down on her back on the deck, taking in a very comforting breath of air, her legs still dangling in the tube. For the next several seconds, she was involuntarily coughing up water. Her clothes were soaked, she was freezing, and her hair was matted to her face and splayed over the deck, but she was alive. ::

:: Ayiana grudgingly stood up, and pulled out her tricorder. Opening up the detector application again, she saw she was fully encompassed by the red circle indicating the 5-meter radius of the dispersion “red zone.” Meaning that whatever was generating it was very close by. She turned off the beeping, but kept the blinking indicator light and vibration warnings on. ::

:: She grabbed her phaser with her right hand, hoped that it still worked after being underwater so long, and slowly - very slowly - made her way down the deck to the corner. Fortunately, the corridor was dark, except for emergency lighting. Ayiana pressed herself against the wall and slowly crept one eye around the corner. ::

Brunsig: We can use this to our advantage. How?

Turner: It's… ah… the path of least resistance? That'll be where they're most likely to escape.

Brunsig: Then let's get over there.

:: Ayiana estimated about half a dozen people down there. They were in ragged and partially removed Starfleet uniforms; no doubt some of the Tharsis’ crew. They were setting an ambush for the Captain and her team! With the dispersion fields still in place, there was no way for Ayiana to contact Captain Reynolds and warn them! She had to do something or they would be captured, or possibly killed - right after avoiding a nasty drowning. ::

:: She crouched low and followed the pack, keeping well behind them but barely within eyesight. At least their own tricorders wouldn’t detect Ayiana. Now if only she had more combat training. ::