:: It has been nearly a week since Ayiana Sevo left Starbase 118 for her first assignment on the U.S.S. Victory. In fact, it was her first permanent assignment since graduating Starfleet Academy a few weeks ago. Ayiana was a Trill; a species of whom some members voluntarily joined themselves with intelligent creatures called Symbionts. Ayiana was one such individual, receiving the symbiont Sevo about six months ago. Ayiana was pretty tall, standing 1.8 meters. She wasn’t particularly fit, but she wasn’t thin either. She could best be described as having a little “meat” on her. Besides her Trill spots running down the sides of her face and body, her most distinguishing feature was her bright red hair, tied back in a huge ponytail, falling nearly to her shins. ::

:: Though she had technically graduated from the Academy already, Ayiana was required to undergo a final “cadet training cruise” in preparation of her posting to the U.S.S. Victory. She later learned this was a requirement of Starbase 118’s command staff for all postings to starships operating in its jurisdiction. ::

:: It had been a rough couple of weeks. First, it took nearly a week just to reach Starbase 118 in the Trinity Sector, a very strategic location near the intersection of all three major Beta Quadrant powers - Federation, Klingon, and Romulan. That trip was not fun. Ayiana was crammed into a small Type 9 shuttlecraft with about a half dozen other fresh recruits; again, for nearly a week. Suffice to say, by the time they arrived at Starbase 118, it was getting rather ripe inside. ::

:: Upon reaching Starbase 118 and taking a much-needed sonic shower, Ayiana spent several days studying the specifics of the region in preparation for her “training cruise” and subsequent posting. Finally, after completing a rough, and rather confusing, simulation in Holodeck 32, she was deemed ready for duty. The next day Ayiana received her transfer orders to the U.S.S. Victory. ::

:: Fortunately, she was granted the use of a more spacious runabout for her trip to the Victory, complete with an actual bed. Ayiana was the only personnel transfer to the ship, but the rest of the runabout was loaded with cargo and supplies for the Victory. Being alone on a ship for a week instead of crammed with several other people was very different. Ayiana had plenty of time to read up on the Victory. She studied its history, current mission (something she was quite confused about - time travel and galaxy-devouring aliens?), and senior staff. The biggest shock was discovering it was captained by a Gorn - a species Ayiana has never seen personally in all her lives. :: 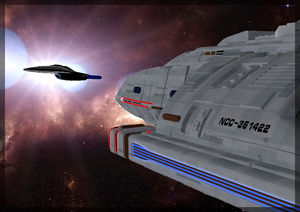 Ayiana arrives at the Victory in the Tempest Sector.

:: Finally, the U.S.S. Victory came into view outside the San Joaquin’s window. It was a majestic sight - the ship was obscuring a nearby sun, with only part of its dorsal side lit up in the sunlight. It was an Intrepid-class starship; the same class as the legendary U.S.S. Voyager. Ayiana sent out a standard hail requesting clearance to dock. Soon after, a flashing red light began pulsing on Ayiana’s controls. ::

Victory Shuttlebay Operator: U.S.S. San Joaquin, we acknowledge your arrrrival and request for docking. You arrre cleared to dock in Shuttlebay 2. Welcome to the Victory.

:: Ayiana noticed the voice had a slight hiss and rolling of some letters. ::

Sevo: Confirmed, Victory. Note that I am also carrying cargo and supplies from Starbase 118. Please have a cargo crew ready for unloading.

oO Finally! I can get out of this shuttle! I can hardly breathe! Oo

:: As the Victory’s shuttlebay tractored the runabout into shuttlebay 2, Ayiana grabbed her two bags - her only possessions. She took a PADD and isolinear chip from one bag and readied herself at the port door. With a quiet -THUD- the runabout had docked, and Ayiana slapped the door controls. Before the door had completely slid open, she ran out of the runabout and collapsed to her knees on the shuttlebay floor, breathing heavily. ::

:: As she was preparing to hand over her PADD and transfer chip, Ayiana looked up to see not a senior officer as she expected, but a Caitian Operations Lt. Commander. ::

Sevo: I’ll be alright in a minute or two. I’ve been trapped in that runabout for a week. Ever since Joining, I’ve been claustrophobic. After reporting to Commander Eerie, I’ll report to sickbay. Where is he, sir?

Victory Shuttlebay Operator: Sorry he could not greet you in perrrrson. There is a senior staff meeting in the VIP Conference Lounge, up on Deck 3. Commanderrr Eerie requested you head there immediately upon arrrrival.

oO Seriously?! Not even any time to relax and unwind? I was hoping to at least see sickbay for some anti-anxiety meds. Oo

Sevo: :: Saluting once more :: Understood, sir. I guess I’ll just leave my bags here for the time being until I get my quarters assigned.

:: The only thing Ayiana took with her was her PADD and transfer chip, just in case she ran into Lt. Commander Eerie on the way. Though she studied the layout of the Victory on her trip here, Ayiana still needed some directions up to the conference lounge. Fortunately, there was a computer access panel just outside the shuttlebay on the corridor wall. ::

Sevo: :: Touching the panel :: Computer, how do I get to the VIP Conference Lounge on Deck 3 from here?

:: The panel replaced its standby set of controls with a small diagram of Ayiana’s immediate surroundings. A line was traced from her present position to a turbolift approximately ten meters to the right. The diagram rotated in 3D as the line traced up the turboshaft to Deck 3, then to the VIP Conference Lounge, approximately another 20 meters from the turbolift. ::

oO Good thing I have a good memory now! Oo