Rover is a sentient cloud creature from the Par'tha Expanse who was first discovered by USS Atlantis and appointed by his people as an ambassador to the world of bipeds. Though childlike in nature, Rover's diplomatic mission is to learn about biped culture in order to improve his people's relations with outsiders. He stayed aboard USS Atlantis with {n|Rendal|Rennyn} as his guardian, and later left Atlantis with Rennyn.

His species, known colloquially in the Uzoka system as Cloud Dancers or Rainbow Dancers, are sentient, cloud-based beings native to the Jenatris Cloud. Their culture appears to be similar to that of a wolf pack.

Cloud Dancers are born and raised in packs, like wolves. Rover’s pack was captured and was being illegally transported aboard Atlantis by a Uzokan ambassador, when they escaped and wreaked havoc aboard the ship before someone developed a translation matrix that allowed Rover to explain and ask for asylum and assistance.

For many years, the Cloud Dancers have been captured and imprisoned by the residents of the Uzoka system within the Expanse. The energy the clouds are made of is used to power machinery, and in some black market circles, is used as a narcotic. Criminals capture the Cloud Dancers illegally, the way whales or seals are killed today. Rover stayed aboard the ship to learn about bipeds so that his people will have the ability to communicate in order to forge alliances with humanoid neighbors and protect themselves from those who would capture and harm them.

Rover has a powerful range of abilities. He is made of powerful energy, but also consumes energy from an independent generator somone made for Ren, so he doesn’t have to pull from the ship. Rover is a shapeshifter, but like the well-known Changelings, doesn’t do well with humanoid features. No matter what form Rover takes, he is always purple. His translation matrix makes his speech patterns seem childish, and he uses nicknames for everyone instead of their proper names. He likes mischief and is overall a very silly cloud.

When Rover got sick in 2391, it was thought he was entering some kind of maturation phase. It is known that he is a young Cloud Dancer, but fully grown Cloud Dancers have not been encountered, and their form is unknown. Ren theorized that Rover was going through puberty and would emerge in an advanced, as-yet-unseen form.

Rover gradually solidified into a rock-like form that is different from any shape he has taken before. It is as though the cloud petrified. He has not emerged from this state in the last year and a half.

Rover is a predominately purple cloud, with flashes of orange and pink, similar to the anomalous and unpredictable material of the Jenatris Cloud. He glows with a white light that is typically subtle but grows brighter with increased emotion. His size is variable, but typically he floats around at approximately 1 cubic meter or less. He is able to expand and contract at will, and can also imitate other forms. He first showed this ability by imitating Ren Rennyn, and when he appears in a bipedal humanoid form, he does so as a man of Rennyn's approximate size, though lacking in specific features. 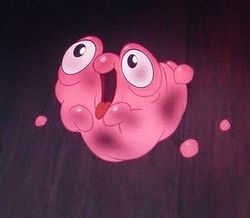 The Cloud Dancers possess a rudimentary language that is translatable in a matrix designed by Emerson Ravenscroft. Rover is a cloud of few words, but is able communicate freely with those around him.

Rover is an inquisitive sponge, eager to learn everything he can about the universe, particularly the humanoid lifestyle.

Rover is the eldest member of a litter that includes Fido, Rocky, Daisy, Duke, Sam and Molly. As the eldest, he feels responsible to take over the pack one day, which also includes cousins Lucy, Bella and Bear. Before then, he plans to increase his knowledge of humanoid lifeforms in order to take that knowledge back to the cloud.

Cloud Dancers are frequently imprisoned and kept as pets by the Grenushi of Uzoka 3. Rover and his siblings Fido, Rocky, Daisy, Duke, Sam and Molly, were delivered to the Krayav of Uzoka 4 as a gift of peace from Telnoth Kylon Haerin of the Grenushi during the mission A Tale Of Two Worlds. During this diplomatic mission, the crew of USS Atlantis discovered the nature of Haerin's "gift" and worked to free the Cloud Dancers. Rover, having grown close to Atlantis Helm Officer Rendal Rennyn, chose to remain aboard Atlantis. Rover's brother Fido was taken by the EJS (Endangered Jenatris Species) group, and his whereabouts are currently unknown.

During his time on Atlantis, Rover has sought to learn about biped culture in order to improve his people's relations with outsiders. He believes that if diplomatic relations can be achieved with the Krayav, Grenushi and other other neighboring species, the trade in captured Cloud Dancers can be brought to an end. For that purpose, Rover works to understand the language and ways of non-cloud-based cultures through observation and interaction with the crew of USS Atlantis.