From 118Wiki
(Redirected from Rose, Mandany)
Jump to navigation Jump to search

Lieutenant JG Mandany Rose is a counselor serving aboard the USS Excalibur-A.

Dany considers the crew of the SS Jen-Tuan to be her family, especially a Bajoran they eventually named Terani who was two when they rescued her from the Occupation.

In more recent years, especially after arguing with her father and leaving Vulcan in 2381, she started to consider the crew of the SS Winding Down as family. Though she only felt really close to Jared Oliver and his sister Kelly. After what happened to the Jen-Tuan, Dany is hesitant to get close to too many people.

Dany tends to talk a lot when nervous or to fill awkward silence—awkward silence makes her nervous, thus begins the vicious circle. She enjoys supporting those around her, rather than requiring their support. She has no ambition currently to have her own ship as she doesn't feel that she is emotionally stable enough for such a task and because of the responsibility of it. 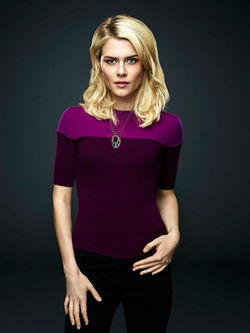 Dany in casual wear with her Jen-Tuan necklace.

Pets (of both flora and fauna variety):

Dany tends to kill any animal or plant that comes under her care. She has the blackest thumb imaginable. She currently has the care of a fish-tank in her office and an orchid given to her by her friend Eris Reyn, a Bajoran botanist and former chef on the Jen-Tuan.

Dany was born to the Vulcan Verok and an El-Aurian named Ishani Rose, both archaeologists on a small moon called Regnal One in the Vulcan Science Colony. During her childhood, Dany enjoyed traipsing after her father through the ruins or sitting by her mother’s knee as she recorded the stories painted on artifacts that they collected.

It wasn’t the ideal childhood, her mother and her father were at odds over her upbringing: specifically the question of whether or not Dany should be forced to embrace logic and control her emotions or if she should be allowed to roam free through the hot jungle much as Dany’s mother did on El-Auria during her own childhood.

Eventually the situation came to as close to blows as any situation could. In 2354 when Dany was 15 her mother took her away on the first non-Vulcan transport to visit the colony that year. Dany, despite all of Verok’s teaching, experienced extreme emotional distress over leaving her home and her father. The only other Vulcan on the transport, a traveling priest named Pashek, helped guide Dany enough to exert some form of suppression on her simmering emotions. When the ship docked at Starbase 24, Pashek persuaded the captain of the SS Jen-Tuan (a ship he frequently traveled with) to take Ishani on as a mission specialist.

Under the command of a stern Rigelian, Loso Aral, and her first officer, the Ferengi Gern, the Jen-Tuan ran cargo of all sorts with the hidden agenda of aiding the Bajorans during the Occupation. When they could they supplied weapons and food and medical supplies to the resistance; sometimes they managed to smuggle Bajorans out of the system.Between their “humanitarian” runs, the Jen-Tuan treasure hunted—using Ishani’s knowledge of archaeology and her collected knowledge of stories from across the galaxy, they managed to accumulate a sizable profit.

After the discovery of the wormhole, the Jen-Tuan began working with the Maquis. The crew was lost when they abandoned ship near the Badlands trying to avoid capture by the Cardassians and their Dominion allies. Dany did not manage to make it to an escape pod and was captured by Jem’hadar who took her into the Gamma Quadrant where she was kept, interrogated, and tortured for information about the Maquis, and then later for information about time and space because of her El-Aurien genetics. 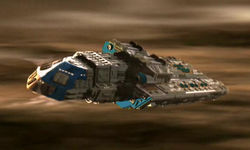 In 2378 Dany was finally rescued by Captain Jared Oliver of the freighter the SS Winding Down from the prison where a rogue Cardassian agent was holding her and others because he was hell-bent on recreating the glories of the Obsidian Order. Jared managed to track down Dany’s father on Vulcan and returned his scarred, emotionally and telepathically unstable daughter to him. Together, Verok and Dany embarked on a two-year journey to try and repair her emotional damage.

Dany left Vulcan in 2381 when her father’s traditional philosophies and the unorthodox philosophies of Dany’s mentor Pashek clashed and reopened the rift between them. Still unable to quench her emotions she rejoined the Winding Down as ship’s counselor.

In 2385 she joined Starfleet at the recommendations of both Jared Oliver and her father, with whom she still has a rocky, yet healing relationship. 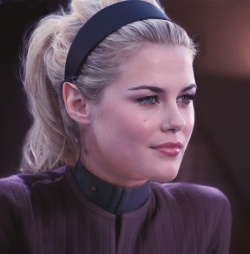 In 2389 Dany passed her classes with average marks, mostly due to disagreements over the nature of counseling between herself and her professors. She traveled to Starbase 118 for her cadet cruise and was subsequently assigned to the crew as a counselor on 238911.28.

After a brief stay on the Starbase, Dany was recalled to Earth to give testimony against two classmates involved in cheating on exams. After an unpleasant week in the company of her archenemy, an Andorian named Y’shras, Dany returned to Starbase 118 as an ensign and with the hope of providing support (to the best of her abilities) for the crew.

Shortly after her arrival on the Starbase, she learned more about the a devastating plague hitting a Romulan planet. Surrounded by the Romulan fleet, many of the crew on SB118 (Dany included) were transferred to the new Vesta class starship, the USS Excalibur. Undaunted by this change of pace, Dany reveled being on a ship again.

With the smaller number of crew her job as the sense of being less overbearing, but as events in Romulan space continue forward, the crew will no doubt be forced to rise to greater heights than they were before. Coupled with a resurgence of demons from her past, Dany is unsure of what the future holds and is suddenly questioning her ability to be able to perform her job and keep spirits high.