Return to the Lithron System (Victory) 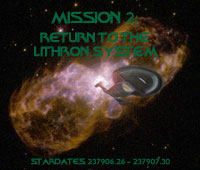 The Victory left orbit shortly thereafter and laid in a course for the Lithron System. Lieutenant J.G. Leela Joaquin and Ensign Cristobal Colon joined the crew via shuttlecraft before they arrived. While en route to the Spider Nebula, Lieutenants DaSilva and Avatar began extrapolating the data from Fajo's journal. They determined the Captain Dannin and her crew were somehow in contact with Fajo while he was still alive. They also determined that the Ferengi had threatened Fajo's life before. Fajo erased the data from the core to cease his obsession of uncovering the truth.

During a dream, Commander M'Gret made contact with the Ilyow establishing that there were multiple factions of Ilyow. Lieutenant Avatar also had a dream, but during his vision, he contacted the crew of the Glory. Doctor Parker immediately began working on a way to halt these hallucinations.

Upon their arrival, Commander Hurne ordered two away teams, one to be lead by Commander M'Gret and the other to be lead by Lieutenant DaSilva. Doctor Parker equipped both away teams with a bio-electro inhibitor armband and a shot of lexorin. M'Gret's team which also consisted of Lieutenants Story and Joaquin beamed near a compound while Lieutenant DaSilva's team who beamed down with Lieutenant Avatar and Ensign Kora materialized several kilometers away to provide backup.

M'Gret's team encountered the descendents of the Glory crew and was attacked. The away team was eventually captured. M'Gret was severely injured while Lieutenant Story was implanted with the life of Captain Rachel Dannin in the form of a symbiont.

Meanwhile DaSilva's team encountered some resistance of their own. Ensign Kora was imprisoned momentarily in a force field but Taffaz and Avatar were able to disrupt it with their phasers. Taffaz split his team as Avatar went his own way, Kora and Taffaz went the other in an attempt to reach the compound. Avatar encountered the Ilyow again, first in the form of his father, then in the form of his former shipmates on the Kodiak, and then finally on the bridge of the Saratoga during the Battle of Wolf 359. The Ilyow felt that the Federation was acting as the Borg as they spread their culture throughout the galaxy and that as a result they believed their race would die.

Back on the Victory, Doctor Parker had her hands full as the crew was beginning to experience hallucinations and lose control of their emotions. As a result the ship's complement was put to sleep using gas. Parker also coordinated with Lieutenant Cicero to create an intermittent 24,000 Hz pulse tone to attempt to disrupt the Ilyow hold on the ship. After encountering the Ilyow on the bridge of the Victory and having them injure Ensign Dyron, Commander Hurne determined that it was time to rescue his crew. He ordered Lieutenant Cicero to replace Lieutenant DaSilva on the surface and to take some security personnel with him.

While on the surface, Cicero informed Avatar and Kora of the plan to rescue M'Gret's team. Kora and Avatar were successful in transforming a tricorder into a subspace forcefield generating with the help of a type-8 phase discriminator from the bio-electric inhibitor armbands. The subspace field disrupted the Ilyow hallucinations within a 25 meter wide bubble. The two security officers that beamed down with Cicero vanished as hallucinations as did most of the plant life.

As Story began to create a relationship within himself with Captain Dannin, he found M'Gret in bad shape. The Victory was able to direct a pulse tone towards the compound so that they could beam her out. Story and Joaquin were also able to beam up shortly thereafter. Story was left in the care of Doctor Parker who would attempt under the orders of Commander Hurne to separate the host and the symbiont. Unfortunately during the separation, Captain Rachel Dannin died.

As the away team led by Lieutenant Cicero entered the compound, the war began between the two groups of Ilyow. The war was displayed as the Cardassian invasion of Bajor. The team located monoliths representing the crew of the Glory. One of the crewmembers approached and informed them that the Glory crew would be fighting alongside the Ilyow to defend their new culture and that the Victory should leave and let this war happen. The away team beamed back to the ship while the Victory quarantined the region.