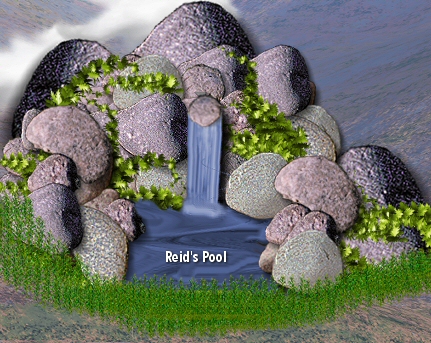 ::Reid watched Sharik walk off, and he turned around facing a gorgeous view of a cascading waterfall running into a stream that ran near the Medical Units. oOLife is great, just look at what the creator has done to start up new life of a race of people needing a home. Life just doesn't get any better: Reid temporarily forget about time, and he found a spot on the bank of the river to sit down. He then removed his boots, and socks, rolled up his pant legs, and then stepped into the cool, refreshing water, before bending over, to throw some water over his head. He finished it off with a few sips of the cool water, then set on the bank, dangling his feet in the water. He was surprised to see air bubbles coming to the surface. Taking a better look, he saw a type of fish similar to rainbow trout. He thought to himself, oO when I come back later, maybe I can get Nurse Treadway to clean some fish, after I catch them for a nice fish dinner. Yep!, Life don't get any better.Oo::