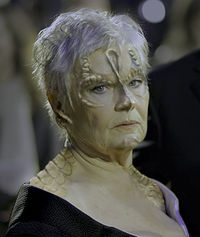 Prianna is an outspoken, liberal, and pro-alien member of the Cardassian Detapa Council, the currently recognized governing body. She was formerly the Cardassian ambassador to Starbase 118. However, given her world's devastation, she treated the ambassadorial post less as an assignment and more as a place where she could live comfortably. This former life of luxury, despite her evidenced interests in her people's well-being, has lessened her power on the Council.

Prianna is a woman just past her prime, somewhere between career vigor and more gray hair. She can always be found in one of several simple dresses she made herself.

Although she attempted to dabble in the arts when she was younger, Prianna found she had no real gift. She does appreciate artistry, though, and knows most everything you could want to know about Cardassian artists over the past one thousand years. She is also fairly knowledgeable when it comes to arts and artists from other species, as well, although she has a very select taste and style. Prianna is not a tactician and never served in Cardassia's military; she was off-world for the entire Dominion War.