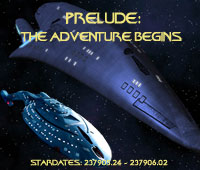 The USS Kodiak returned to Starbase 118 just after her mission to the Lithron system on 237905.24. It was on this stardate that several of the Kodiak crew was reassigned to the Intrepid Class starship Victory. Commander Jordan Hurne, the former first officer of the Kodiak was given command. The highly experienced Lieutenant Commander M'Gret would serve as his first officer. Lieutenants Nickolas Cicero and Taffarel DaSilva would serve as Chief Engineer and Chief Science Officer respectively. Lieutenant J.G. Heath Story was assigned as Chief of Security, while Lieutenant J.G. Mal Avatar became the ship's Chief Tactical Officer. Doctor Megan Parker was the only senior officer not to serve on the Kodiak.

The Victory was commissioned on stardate 237905.26 during a brief ceremony which included Admiral Zimbata, who was the captain of the last starship to bear the name Victory. The Victory pulled out of Starbase the next day as the Kodiak and the Victory went their separate ways.