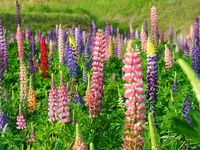 The plant life on this planet is comprised mostly of different types of Poaceae [1], but many could be compared to flowers, as they come in almost every color and they have incredible scents. Trees and larger shrubs make up most of the higher layers, but flowers and fungi are rare. Fabaceae [2] and Rubiaceae [3] make up the vast majority of the flowering plants in this world.

While the surface may have gorgeous forests the underwater world also has its fair share of forests. Mostly in the form of long, grass-like water plants, but there are a few places in this planet's sea's where actual underwater forests grow. The species in these forests are uniquely evolved trees, but they work in similar ways as surface species. Roots keep them in place, while a trunk helps carry the nutrients to every part of its body. At the top, the branch's often reach above the surface and sprout various leaves and flora, giving the water a mystical feel.

Most the wildlife on Threa'ya is comprised of thousands of species of birds and reptiles, hundreds of amphibious species and over four million species of fish. There are approximately four hundred species of mammal including the Threans.

The Threans are a canine, humanoid, race. They are the dominant intelligent species on Threa'ya.