Saveron: Forty-two minutes ago I received notification from Starbase Security that Commodore Rajel has been kidnapped. The Rodulan has been identified by Starbase Intelligence as a member of the Orion Syndicate. Intelligence are working on the second individual. They were both registered as crew on a small trading vessel; the first under what has been confirmed as a false identity. The vessel was docked at port 126, but departed ten minutes after this footage was taken, with station sensors confirming that it went to warp. We have the calculated trajectory from the point of departure, however, beyond that point, we must follow the trail. And that is what we shall do. Admiral Heraan is arranging an interim vessel for us. It is my intention that we shall go undercover, as an independent vessel seeking admission into the Orion Syndicate. If successful, we shall utilise our access to locate the Commodore, and extract her. 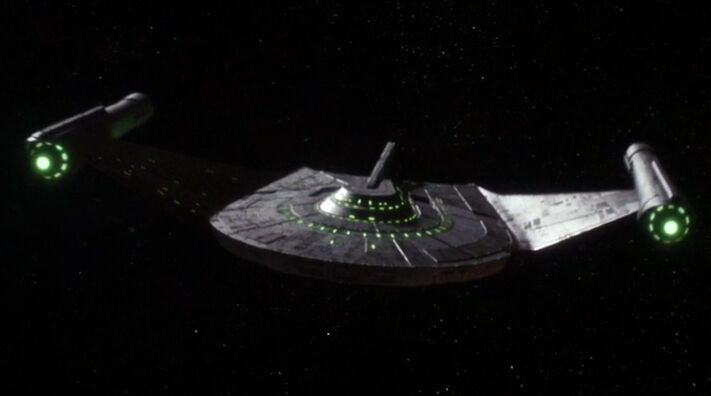 Not to be confused with the significantly larger D'deridex-class - commonly called a Warbird - or the Klingon Bird of Prey. The pre-Hobus models were larger than those encountered by Starfleet one hundred Standard years ago, but still a relatively small vessel, designed to operate either in groups, or in a hit-and-run style manner. The kind of vessel a lower ranked Romulan commander might possess.

Saveron is informed by Security of Starbase 104 of the abduction of Jalana Rajel by a Rodulan and an unknown man. The Rodulan is a member of the Orion Syndicate, which leads to the assumption that the Syndicate is behind the abduction. The crew begins their preparations to go on their undercover mission.

Shortly before the undercover ship arrives Saveron is contacted by Elder, the former CO of the Theseus (See Dilithium Digger). He spills the beans that the Syndicate actually has Jalana and hints at a 'medical procedure' to remove her parasite. He also claims that finding 'him' won't let them find Jalana, meaning that she is not with him.

The Undercover ship arrives and the prepared Conny Officers transport to it via Spears' civilian ship, the Gravitas Deficit.

The Crew arrives on their assigned Bird of Prey and begin preparations to depart.

Engineering reports: "Power generation is online and running at near-peak efficiency. Some angular momentum has introduced a power fluctuation, but we are working to correct it now. The instability is minor. It should be simple to correct it mid-flight. However, it might be visible as an electromagnetic distortion through the cloak." ~ O'Connor (Flores)

Delvok (Taurik) and Faelyn (Lystra) determined the most likely destination as Orinoco Beta. A location that matches the parameters best and is a better-equipped facility. It would be the best tactical choice for the syndicate to bring her there. On the way to this location, the ship will take a slight reroute for a manoeuvrability and Weapons's test in an asteroid belt near Epsilon Phi. As that was finished the ship continues its way to its destination.

Jalana is captured and tied to an operating table being prepared for a 'kind' surgery of removing her 'parasite'. "Boss" counts on the Constitution Crew to come to save her and is aware that their ship is in no condition. But he does not know how they will arrive.

Arrival at Orinoco Beta. The ship arrives at its destination with no station in sight. Noticing a small craft 'vanishing' near an asteroid they discover that the station is hidden inside said asteroid and through their backstory gain access. The crew splits into groups to enjoy their "Shore leave", speak find Jalana.

The Team visits the Lwuin Qei establishment to get more intel. They cause a barfight to see the security forces in action and obtain information where the emergency entries/exits as well as where the guards are and how many forces would react how fast. They flee the chaos and Kim Yeong-Ae mentions that the ship that had brought Jalana to the station is still docked and the team heads to the docks where Cha attempts to hack into the computer while T'Vor distracts some of the pirates around the area.

The Team visits different shopping locations for valuable equipment. They find various trinkets, including a jar - no really. That is not just any jar but an organ storage unit. Then they move on to the next place in hopes of finding what they need and also keep their eyes open for a certain medic called Kyyrtan – a Delvian who sells all kinds of poisons. It appears that Devon and Dauntin find him, while Delvok and Shyla discover a weapon for the Vulcan and realize a woman of a species not known to either is oddly curious about Shyla.

The Team visits the Pulsar Bar to learn more about recent arrivals. They meet an apparent peddler or smuggler (Ernol) who offers them a load of Benzocyatizine of a deal that fell through. Edward recognizes it as being specific for Trills. They draw attention of Matrol who lures MKoll into making the deal to kill Boss and his associates. Her pheromones and a drug in the air knock him out shortly after, they also find out that their contact Ernol is dead (most likely murdered). They bring Mkoll back to the ship where he is taken care of.

The Team finds Boss and pay respects, offering him the gift of Dilithium Crytals. He hires them to kill Matron and her associates which by now also includes Mkoll. In the middle of their talk with him Elder joins the conversation who is more than eager to observe the treatment of a patient, which Galen rightfully assumes is Jalana, while Haeva and Ha'Naii do not draw that conclusion unaware of Elder's information given to Saveron. After some banter, Galen accepts the job and the team leave. He contacts Lissene who immediately recalls the crew back to the ship.

After Galen returns to the ship he informs Lissene about anything he knows about this mission, the thread and the conversation with Boss and between him and Elder. He puts her in charge of the storming of the castle to retrieving Jalana. Immediately Lissene calls a briefing and informs the crew of the current status:

Edward offers to play distraction since he was lured in by the Matron to go against Boss, and Boss already sees him as Matron's henchman.

Every officer is instructed to prepare and grab their equipment to meet in 10 minutes at the docking hatch to move out. Once time is up the officers meet up for instructions.

Meanwhile, Mkoll will go through the front door with Haeva and Shyla. Since Boss sees Mkoll as one of Matron's and Haeva was part of Galen's formal greeting, she will present Mkoll to Boss to execute Mkoll in front of him to show that we are serious about his support. The execution will of course not happen, it is merely the way into the building. According to the conversations during that meeting Boss will be gone to witness the surgery, so the executioners will insist on waiting inside, cause a ruckus and lure as many guards there as they can to disable them, before moving into the inner building. That should help the other teams to be intercepted by less of his people.

Because they are out of time the teams are being beamed close to their destination locations and move in immediately.

Each team deals with guards and finding their way through the building.

After the whole crew has beamed back on board - most of them injured - T'Aven is given the bridge by Akeelah who has to remain in sick bay. T'Aven brings the ship out of the Asteroid, among a group of ships of pirates fleeing the Rock during the riots of Matron's take over. As soon as the Rock is behind them, they cloak and fly off.

In the next system Elder is waiting for them with his small ship, a new Theseus, and attacks them after finding out where they are with help of a Tachyon burst torpedo. Unbeknownst to the Conny crew the crew of the Theseus mutinies and throws Elder out of an airlock where he blows up. The Conny is informed of the change in leadership and moves along their way.

The crew realizes that someone is following the Ra'khoi and two hours later four ships catch up to them and open fire. A battle begins in which the Ra'khoi is damaged badly. When all seems lost the USS Constitution under command of Lt Lazarus Davis and the USS Sagarmatha under command of Admiral Heraan appear out of the blue and with a few shots chase the pirates away.

The damage on the Ra'khoi was too extensive though and the Singularity containment failed, not to forget that the ship had a plasma cannon on board, so the crew had to abandon ship. Right after being beamed back to the Constitution, the Conny and Sagarmatha jumped to warp just so getting away from the exploding ship. All crew survived the mission, though some have severe injuries and Commodore Rajel has not regained consciousness yet.

Once arrived at SB 104 the crew resumes their shore leave to recover from the rescue mission.