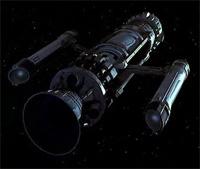 The Phoenix name has a long and proud history of ships. The first ship to bear the name Phoenix was Zefram Cochrane's historic premiere warp vessel. Constructed from an old Titan V nuclear missile, the Phoenix was the brainchild of Zefram Cochrane, and the first vessel in Earth history to travel at warp velocities. The ship's configuration was a simple three-man space capsule design with a long attached section containing the nuclear reactor and warp nacelles.

The first, and only, flight of the Phoenix took place on April 5, 2063. Just before 11am, the Phoenix lifted off from Montana, North America, carrying three crewmembers, Cochrane himself, William T. Riker and Geordi La Forge (both of the USS Enterprise-E, from 2373). After separating from its launch vehicle, the Phoenix extended its nacelles and engaged the warp drive, crossing the warp threshold which attracted the attention of a passing Vulcan ship, the T'Plana-Hath (this encounter would lead to the event known as "First Contact"). The vessel remained at warp for approximately one minute before returning to sublight speeds, and heading back to Earth. By the 24th century, the Phoenix is an exhibit in the Smithsonian Institution.

The next ship to bear the name Phoenix was the USS Phoenix, a Nebula class ship, registration number NCC-65420, under the command of Captain Benjamin Maxwell. This ship was constructed by the Yoyodyne Division at 40 Eridani A Starfleet Construction Yards and commissioned on stardate 40250.5 in 2363.

In 2367, Captain Maxwell turned vigilante with Phoenix, destroying several Cardassian outposts and ships in Sector 21505 seemingly without provocation. He claimed his actions were justified because the Cardassians were preparing to renew hostilities only a year after peace had been settled with the United Federation of Planets. Captain Jean-Luc Picard was assigned to intercept and stop Maxwell. En route to intercept the Phoenix, the Enterprise's sensors revealed that Captain Maxwell was attempting to destroy another supply ship. In an attempt to prevent the further destruction of Cardassian lives and property, Captain Picard gave a nearby Cardassian warship the Phoenix's Prefix code to give the Cardassians an advantage. Despite taking a direct hit with its shields down, the Phoenix still managed to destroy the attacking ship with a salvo of torpedoes.

Captain Tristan Wolf was placed in command of the third ship of this name, the USS Phoenix-B. (Starfleet comissioned the name Phoenix-B to denote that this was the third ship of this name; the "-A" marking was skipped.) This vessel, run out of StarBase 118, was the flagship of that fleet for many years before being surpassed in power by some of the newer, more heavily armed ships of StarBase 118 like the USS Nemesis. Due to the fact that Captain Wolf was promoted to Admiral of the StarBase, the ship was re-assigned as the StarBase's 'field ship', and used in the next few years on a per-mission basis, mostly acting to defend the StarBase, and as a crew transport. 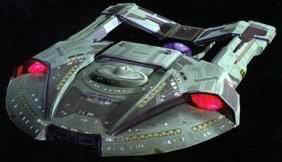 As the enemies of the federation became more numerous, and more powerful, a new ship was needed to defend the StarBase. The Phoenix-B, while still a powerful ship, had outlived it's usefulness and was experienced numerous computer failures, which began on stardate 9812.10. Willing to accept that simply retiring the old ship will be less of a drain on resources than attempting to do massive refits on the computer's systems, StarBase 118 worked to find a new ship to replace the Phoenix-B.

After the proposal for the Steamrunner-Wolverine class was completed, the USS Tiger became the prototype ship of that class. With the success of the prototype, the USS Phoenix-C was built as the first ship of the class and joined the lineage of ships named Phoenix.

Successful in many ways, the Phoenix-C became a versatile, often-used addition to the StarBase 118 fleet, and saw service for a long period of time under Captain Malcolm Lysander, the Commanding Officer of StarBase 118 Operations. Due to its small crew requirements and diverse array of abilities, acting as a field ship for the Ops crew was a perfect choice for the new vessel.

Hopefully the USS Phoenix-C will continue the prestigious history of it's predecessors.

Content from this article may have
come partially, or entirely from
Memory Alpha
Retrieved from "https://wiki.starbase118.net/wiki/index.php?title=Phoenix_Lineage&oldid=18813"
Categories: