Petra was born and raised in the beautiful country of Iceland. Contrary to popular believe, Iceland is a green and beautiful land. Yes, it is very cold in the winter. Deciding against staying there, she enlisted in Starfleet and went to Yeoman "A" School. Serving as an Admin Clerk on several different ships, has shown Petra a life that should would not have known if she would have stayed on Earth. Petra met her future husband onboard the U.S.S. Excalibur-A. After a short time together the Excalibur-A was decommissioned, they were separated. After being assigned to the U.S.S. Victory, she met Cory again and both decided to move forward with their relationship. The Victory was decommissioned, the couple were transferred to the newly commissioned U.S.S. Gorkon. She was married onboard the Gorkon by Captain Reynolds. Petra was temporarily assigned to Starfleet HQ. When the Gorkon was listed as Missing in Action, Petra joined a rag tag group to steal a starship to look for the Gorkon. The Gorkon was found and returned safety. Petra was reunited with her husband. Shortly after the reunion, Petra was arrested for Grand Theft, Starship. She is currently being held at Starfleet Security in San Francisco. She is currently awaiting a court martial. The whole affair was swept under the rug. The group was released and sent back to their commands. Petra was sent to Officer Candidate School. After graduation she was promoted to Ensign and assigned as Rear Admiral Quinn Reynolds' Flag Aide. After finding out that her husband and best friend had feelings for each other and not telling her, Petra requested a transfer to the USS Triumphant as Captain Brunsig' yeoman. After time and waiting, Petra filed for divorce. She was transferred to Starfleet Headquarters on Earth as the Flag Aide to Vice Admiral Tonya Swaine, Head of Starfleet Administration. 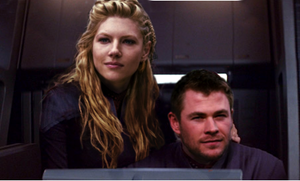