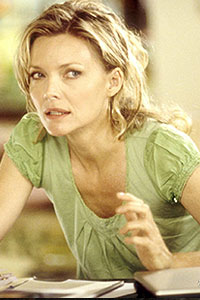 Irina Pavlova is currently working as a bouncer at the Plaza Caglia Bar and Restaurant in Ravensville.

Irina Pavlova is full of surprises and anyone who thinks this woman is going to be a pushover is in for a world of pain and misery. Poking, prodding or probing her is likely to prove exceptionally dangerous to your health. Having gone through and come out the other side of a turbulent and difficult time personally she’s chosen to pursue a non-traditional career. Irina is breaking out of the mould and showing an independence of mind all while raising a small girl. The girl’s father is out of contact.

Irina has had a tumultuous and somewhat tragic life thus far. She and her father fled the Soviet Union in 1986 following the execution of her mother for an unspecified "crime against the state". Receiving asylum in 1987, Irina naturalized as a United States citizen in 1994. From there her life seemed somewhat normal, graduating from Redondo Beach High School in 1994, receiving a bachelor's degree in political science at UCLA in 1998 and a masters in public administration in 2000. In 2001 she was scheduled for a November 1 class at the California Highway Patrol Academy, but following the tragic events of 9/11/01, she joined the United States Marine Corps and was immediately selected for pilot training on account of her "better than perfect" 20/10 vision and exceptional physical fitness.

Commissioned as a second lieutenant in 2002, Irina was immediately deployed to Afghanistan as a medevac helicopter pilot. Irina flew over 300 combat evacuation missions until her Blackhawk helicopter was shot down in the Tora Bora region. By this time she had been promoted to the rank of captain.

Irina survived the crash, but was captured by Taliban forces and kept prisoner by Mullah El-Arrain, a Taliban commander, for the next nine years. During that time she was repeatedly beaten, tortured, raped and generally just not treated very well.

Freedom came when one of the mullah's wives determined that Irina was pregnant, and in the middle of the night untied her bonds and set her free. Irina left the compound, but not before killing all twelve of the men in their sleep except for El-Arrain whom she woke up before killing. She made her way to the US Embassy in Islamabad, Pakistan, and was repatriated to the United States and medically discharged.

Since her discharge in 2012, Irina returned to Redondo Beach, but found the familiar surrounding and large population to be too much for her to handle. She answered a job posting for a bouncer at a bar in the mid-west, and has been in Ranvensville ever since. Since arriving in the state of _______, The killing of Mullah El-Arrain has not been forgotten and Irina was able to obtain a concealed handgun permit through the county sheriff's office because of two attempts that have been made on her life by Taliban agents operating in the United States. Both attempts obviously failed (as Irina is still alive), and the two attackers were never found by authorities (but were found by Irina). She carries a 1937 Walther PP .380 pistol that her grandfather received from a Nazi general upon the surrender of German forces after the battle of Stalingrad in World War Two. The pistol has Nazi German Wehrmacht markings and is kept in a mahogany case, along with a picture of her grandfather shaking hands with the surrendering German general.

The pistol was passed to Irina's father, who started teaching Irina to shoot as soon as they immigrated to the United States as well as enrolled her in Aikido. With her exceptional vision and hand-eye coordination, Irina is a natural marksman and quickly set records at Marine Corps Boot Camp and when not flying evac missions, competed on the Marine Corps combat pistol team in Afghanistan. Since her return from captivity she spends much of her free time practicing her shooting skills, fanatically exercising and working on her Aikido. Irina has had her black belt since she was 19, and since joining the Marines and especially since her escape from Taliban captivity she has stepped up her training and completely changed focus from competition to real combat. Irina is also very strong, having been extremely athletic all her life, and more so since her return to the United States as she has adopted something of a maniacal fitness regimen. Irina has physical strength that would be considered above average for most American men, and the fighting skills to make her a formidable opponent indeed.

Irina's daughter Katya is the child of one of the Taliban fighters, probably Mullah El-Arrain, and has his black hair and dark eyes.

Irina was injured in Afghanistan and medically discharged due to the complete loss of all color vision and the inability of her pupils to constrict. The result is that she must wear sunglasses in most lighting, super dark ones outdoors in daylight. She also has no color vision whatsoever, though sometimes she thinks she can see hints of red, yellow and orange. She watches the sunrise and the sunset whenever possible, trying desperately to see color. She also took some shrapnel in her left side leaving some impressive scars and nerve damage that makes fine-motor control of her left hand a bit challenging (usually squeezes things too hard). She has occasional muscle spasms around her left eye that is unpredictable and appears much like a nervous tick, but is actually quite random in occurrence and is not connected to emotion or situation at all. It has been decreasing in frequency since the crash, and now occurs perhaps two or three times per week instead of almost constantly just following the crash.

Irina also suffers from pretty severe PTSD, though by lying to the VA counselors her PTSD is listed as cured and she is currently only receiving treatment for her eyes.

Irina's medical discharge was honorable, she receives 75% disability payments from the VA and was awarded the Silver Star and the Purple Heart, among numerous other lesser decorations.

Irina used to be an outstanding violinist but playing the instrument is painful and sloppy due to the nerve damage to her left hand.