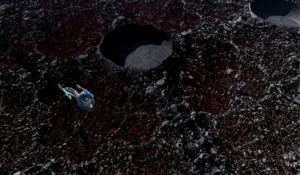 The crew rescued from Turisan II by the USS Endeavor-A set to work in restoring their vessel and return to duty. The ner month spent on the surface living with the pre-warp society left a mark on each member of the varied crew. Some found it hard to readjust while many found themselves in possession a new-found world views and appreciation for their regular lives.

A awards and promotion ceremony was held almost as soon as the crew was all back aboard. During which Captain Renos was joined by Fleet Captain Boyd of the Endeavor, who congratulated the crew for upholding the values of the federation and prime directive, awarding the entire crew with Explorers Ribbons. Captain Renos was awarded a Purple Heart for nir’s injuries in the line of duty while on the surface. She also for extra efforts in keeping their presence under wraps handed out a Captains Commendation ribbon to Captain Renos, Commander Traenor, Lieutenants Valdivia, Varaan, Shayne and Cook as well as Ensigns Pond and Nkai. The ceremony concluded with Renos and Traenor announces two promotions Lieutenant Lyldra to lieutenant Commander and Lieutenant Junior Grade Cook to full Lieutenant.

The Darwin once again at full operational status began her next mission. The establishment of Unity Base on the Dyson’s Sphere they had discovered. The base is to be jointly administered by the Talaxians of Talaxia Colony and the Federation and would serve as the Darwin’s port of call in the Pouiyeog region. As well as cement and foster further relations between the Federation and the Talaxians.

The effort to get Unity base built and operational would see the crew quite busy for some time to come and everyone was busy and needed on different aspects of the project.

Renos, Lyldra, and Stennes were to meet with Talaxian representatives Nadenka and Brixon, to go over Details of the bases administration and what Talaxian contributions would be. They expect the Talks to go smoothly but there was still much to be discussed.

Doctor Cook and Doctor Pond would be working with the Talxian Doctor Dalixo, on the bases medical needs. As well as establishing a new baseline for Talaxian physiology and needs.

Valdivia, Varaan, Logan and the Talaxian Engineer Zarax were tasked with exploring the ruins of the former unity base. Their goal to try and retrieve as much operational and sphere exploration data as possible. Also to place a tribute to the Talaxians who perished in the Numiri attack.

Thomas, Shayne, Adu, and Sienelis were assigned to a survey team. The Dyson Sphere’s technology has proven resistant to scanning and all attempts to scan the interior have failed. Even a complete map of the surface was unable to gathered from orbital scans. This group would be scouting out the area’s around the new Unity base as well as looking for any signs of the Numiri. A map of the surface would be highly useful to the new base and as such their mission quite important.

Doctor Cook and Doctor Pond met with the Talaxian Doctor, Dalixo in the Darwin’s sickbay. The three medical professionals were there to exchange information and get an idea of the medical needs any joint operation would likely need. They discussed medical equipment and submitted to scans of each other to exchange medical data. Dr. Dalixo offer her assistance when an accident aboard sent crewmembers streaming into sickbay.

Renos, Lyldra, and Stennes Greeted the the Talaxian Delegates Nadenka, and Brixion. The latter two giving the guests a tour of the Darwin before their diplomatic talks. Once the talks began all in attendance were shocked when Brixion called into question Didrik Stennes’ standing with starfleet. Causing the Captain to come to his defense and Lyldra to call out the Talaxian for using such a dirty tactic. Once they moved pass the adversarial opening the talks progressed smoothly.

Thomas, Shayne, Adu, and Sienelis joined by Praxo a Talaxian aboard the shuttle Santiago. Their survey at first showed no signs of anything worth reporting then the steam found something strange. An area of the outer shell of the sphere within an impact crater glowed an eerily beautiful light. The substance also deflected the shuttles sensors and had the extra effect of jamming the shuttles communications. The Laudean LtCmdr Adu was able to detect an unfamiliar type of energy emanating from it with her natural fielding ability. Attempting to back away from the crater the shuttle is rocked forward, Adu feeling as if they were being pulled in by the substance. With the shuttle overheating they team worked to create a subspace field around their shuttle and a flight plan that allowed them to break away from the mysterious pull. The remaining weeks of their survey proceed uneventfully. The glowing substances location mapped but unexplained.

Varaan, Logan, Valdivia and the Talaxian engineer Zarax donned EVA suits to explore the remains of the old unity base. Their mission to recover research data from the old base as well as erect a monument to those lost. They also had the unenviable task for tagging the remains for removal. Once aboard the team quickly learned the Talaxians had built the base on existing structure framework. Valdivia quickly noted markings that could be a language and spent much of their time there studying it. The systems were repaired over the next month and the bases’ computer cores recovered. No traps left behind were found though Logan located several observation devices.

After a month of building the outer hull of the new unity starbase the crew began their next tasks. Thomas, Logan, and newly returned to the Darwin LtCmdr Jorey were too determin offensive and defensive system needs for the outpost. Seeing to establishing Unity’s medical suite and scientific facilities fell too Cook, Sienelis, Pond, and Lt Brell. Valdivia, Varaan, and the Talaxian Engineer Zarax saw too the source and style of station power and computer interfaces. Civilian facilities such as the promenade layout and recreation facilities design was overseen by Stennes, Lyldra, and Nadenka. A team consisting of Shayne, Praxo, and Lt. Manius would be conducting a series familiarization exercises between Talaxian and Starfleet support shuttles.During the final process inspections and troubleshooting were handled by the command team of Renos, Traenor, and Brixon.