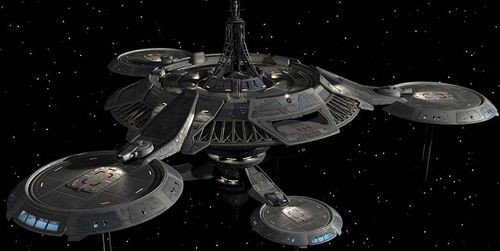 A small mysterious outpost sits less than a light year away from Deep Space 224, its official designation is Outpost 89 Delta. Many rumors circulate on DS224 as to the purpose of the small intelligence outpost ranging from intelligence officer training to a dedicated listening post to eavesdrop on the Klingon Empire. But the most logical of ideas was put forth by DS224’s previous Vulcan commanding officer, that the outpost was a testing ground of sorts given the unique composition of the Borderlands that drew the Vulcan Science Academy to the station.

The outpost itself has no obvious defenses or manned facilities visible to any from the outside, which has led to the suspicion the outpost has none. This idea was supported when Star Fleet ordered it to be included inside The 417th Fighter Wing’s protection order. Even though the fighter wing makes regular sweeps of the area, there is only one recorded incident of activity from the station was reported by an Ensign shortly before he disappeared.

“ Blue Devil Lead, Something is happening at the outpost! It’s (REDACTED)……STATIC……(REDACTED)…….I think it’s some kind of SOS……”

Star Fleet Intelligence has denied any such incident and maintains strict silence as to the stations purpose, manning, and intent. No craft have been recorded or seen on visual scanners docking with the outpost lending aid to a theory that it is fully automated with little to no maintenance or direction from outside sources. All vessels are directed not to make any scans of the outpost or break its half light year perimeter under the threat of being forcefully boarded and imprisonment.