Lieutenant Junior Grade Nyals, a Betazoid is a Counselor aboard the USS Constitution-B. 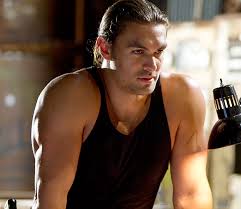 Nyals getting ready for training with Cyr Wheel during Starfleet Academy

Nyals is an orphan. He was brought and left at the doors of the Fana Monastery in the woods of the northern Dalar. His parents were never found. He lived there as "wild animal", as Nyals himself was describing it. He was watching Fana Priests and Priestess fighting and he was learning by observing. But he did not have formal education till he was sent to the orphanage in the nearby city of Iuwobi, tourist center. He was problematic child and run from orphanage often. Worse was when his mental powers started to develop and he used them to attack always with lot of rage. Anger was his normal state of mind. After one escape when he was caught in stealing from tourists using his mental powers, he was sent to Vulcan. Master Fabol knew Nyals from Fana Monastery and when he offered to take Nyals to P'Jem, government officials decided it is best for everyone. Nyals lived in the settlement on a P'Jem and after a year of preparations he was moved to P'Jem Monastery where he learned to control his emotions and keep anger at bay.

Nyals had many names during his life. Fana Priests called him Eibest (agile) for the way he was running through the woods and climbing trees. When he moved to the orphanage he was given name Somlin Dalar; he hated that name and chose to call himself Nyals the Black, what was accepted as his "street name". Nyals was one he chose to keep when left the P'Jem monastery, honoring the Vulcan tradition of having one personal name.

It was his choice to stay on Vulcan and take the education among the people who knew how to control emotions. His choice was due to the fear of losing composure if subjected to strong emotions again. He was returning to P'Jem often and in the end decided to be disciple of Monastery, while taking classes from there. After 12 years of training he became Master of Mental disciplines, while it is something Vulcans master after 4 maybe 5 years and Nyals do not like to talk about the time he spent mastering it, it is still impressive feat, since only few non-Vulcans ever achieved that level of control.

Nyals never excelled in education and when he decided to join Starfleet he failed three entrance exams before he decided to return to P'Jem and seek help from his first mentor in preparing for another attempt. What he did not know is that though his juvenile record is sealed Starfleet received it and that was the reason he was initially rejected. Connections Master Fabol has, gained Nyals the place in the Starfleet Academy.

Nyals finally passed the entrance exam and started training as medical officer, but soon realized he will not make it and changed major into Counseling. During Academy he didn't make lot of friends, because beside having learning problems he had another one. During the first year he met on the campus party a friend from Betazed. He never had many friends but Dosea Hosie was very close to him from the first day. She was heavily drugged, drunk and looking for customers. Nyals knew she will not live long if continue like that and made his task to save the beautiful woman. His mentor, Counselor Nechayev accepted Dosea as Nyals' Academy Counseling project and provided them to live together in the shared quarters. When two years later it was obvious Dosea will need lot of care and still will never be able to independently care for herself, she signed to be Nyals dependant. Nyals passed Academy with lot of dedication and hard work invested, but without failed years or failed exams. When Nyals was posted on Apollo, Dosea stayed in their quarters in Academy campus and under the surveillance of Counselor Nechayev, who proceeded with her counseling and care for Dosea. 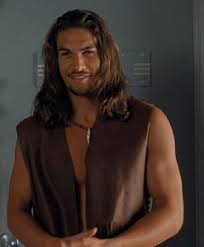