Nugra was the oldest child in the Tk'Moong family and was born on stardate 235001.03 to his father Moong and his mother Marga. He was a competitive Gorn at an early age always challenging the neighbors to some type of Competition. No one knew what things that Nugra would attempt.

When he was seven, his parents took him to the annual festival that was held in the main city of Trogar and there he found his fascination. He found the art of fighting with the Gorn sword called the Vss'Nok. He spent the whole week at the festival watching the different Gorns challenging each other in the sport and he would watch in utter fascination at the lizards who would wield the five-foot long silver blades at each other and be excited at the sound of the metal ringing together. He watched and learned the rules to the combat and dreamed of someday learning how to fight like a Gorn warrior and to bring honor to the Gorn Confederation and to his family.

Unknown to him, his father knew of his son's fascination, after watching him stare at the ring and the warriors in combat the whole time they were there and was working on a surprise for him. An Old Master of the Vss'Nok, Trr'Kaa was hired to teach Nugra how to fight.

Nugra trained for years and when he was seventeen, his teacher decided it was it was time for him to attempt the Territory competitions. With a cool mind, he fought himself through them and won many precious stones for his sword.

In the Vss'Nok fighting, the Gorns had a Precious stone, diamond, or gem representing each competition there was. They would award the Stone to the winner plus the cash prize, so they could put it on the hilt of their Vss'Nok so anyone viewing it would know that he had fought and the honor of the stone. Nugra continued in the territory and then fought regional. Finally, to his excitement, he was given the opportunity to fight in the Imperial Vss'Nok ring.

That meant that Nugra would be fighting the best of the Gorn Confederation for the large Red ruby that was known as the Princess' Ruby. It was non-stop fighting for four days fighting one after another in the hardest Compton in his life, also being wounded when the blade would get past the Armor and cut his scales. He continued at it though and after the last battle against the Incumbent Gorn. He won the Princess' Ruby after the 8-hour non-stop combat. He was awarded the Ruby by the Princess herself and after that had to be helped off the field in exhaustion.

Nugra was a hero on Tau Lacerte III, but bad news broke the celebration. His younger brother, Morg, was in trouble with a terrorist group. Nugra went to his brother immediately and the two took off on foot for the capital of the Tau Lacerte III to warn the Gorn Assembly leader of the threat to his life.

Nugra and Morg were ambushed on the way out and Nugra fought of his enemies with ease, but his brother was barely holding his own. If it weren't for a Betazoid Merchant who had seen the struggle and contacted the police, his brother would have been dead.

Morg was taken to try and Nugra, feeling guilty that he spent his time learning to fight instead of being with his brother and family, contacted the Princess and asked her to change the death penalty of his brother because he knew that his brother would never go into anything like that on purpose. 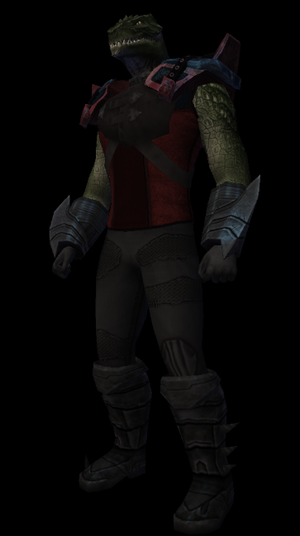 Nugra's first stint in the Gorn Military was serving aboard the GSN Great Hero patrolling the Tholian border. Though the Tholians pretty much ignored the Gorn ship, Nugra was put to the test a few times when they ran across Orion pirates and other strange things in space.

Nugra's worse experience was when he was a Senior Ensign (Fed: Lieutenant JG), the Great Hero found an abandoned station of a race nobody knew or remembered. He was attacked by a probe that latched on to his skull. After three days and three nights of agonizing pain as it dug deeper into his brain, the medical bay was able to remove it with no lasting brain damage.

On reaching the rank of Senior Lieutenant (Fed: Lieutenant Commander), Nugra was assigned to Starbase G-32 where he functioned as the Chief of Security hunting down and taking care of the pirate and black marketeers that operated around the base. He was credited with a forty-five percent drop in the crime rate.

Learning of his brother's location in the Federation, Nugra requested a transfer through the exchange program and found himself stationed aboard the USS Victory. It was too late though as his brother had been assassinated by Loki, a shadow assassin of the Orion Cartels. 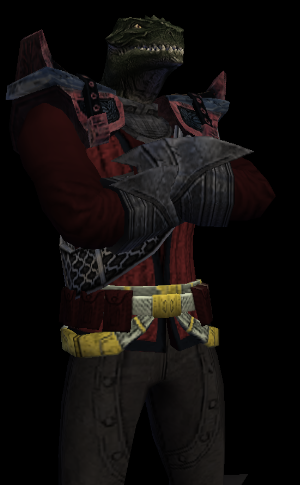 In 2382, Nugra received a summons from the Princess Vsh'ta of the Gorn Confederation calling upon him as a winner of the Princess' ruby to become the royal defender. The rise of the Black Claw clan had begun the first signs of de-stabilization that would become the Invasion of 2383.

For three years Nugra headed the elite Defenders of the Egg, the royal bodyguards of the royal family and highest political leaders. It was this position, that he learned of the planned coup of the government. For the last remaining years, Nugra worked with the loyal Gorns against the Black Claw to mass a fleet that was to be used when the Black Claw attempted their attack.

Unknown to the loyalists, Senior Master (Fed: Rear Admiral) Tre'vek had sold out their plans and his Princess. The first battle of the Civil War began in 2385. Though the Loyalist Fleet was successful, the damage plus the lack of surprise crippled their chances of stopping the hostile take over.

As the Civil War raged, the Gorn Confederation, under the direction of the Black Claw leadership, launched an attack against the Federation in 2383, Nugra was part of the rebel fleet that refused to obey the order and fought to stop the Black Claw from destroying the relationship they had with their neighbors.

The loyalist fleet put a strong fight initially, but the numbers and support of the Black Claw were too strong for them and it ended at the Battle of the Singularity.

Nugra was able to take thirty-two of his compatriots and escape the singularity when it opened again, but their wrecked ship, barely functioning, was captured by the Hegemony fleet that was awaiting the anomaly to open. His popularity though and public opinion kept him from being executed on the spot.

In the end, the Black Claw thought it would be in the best interest of the new government to throw the people a bone by releasing Nugra and sending him out of their space. Nugra left and made his way back to the only familiar home he had left, the Federation.