Nugra is known to be strict and to the point when it comes to on-duty work. In his younger years he was a by the book leader, but over the years he has developed his own code of conduct that he follows. His subordinates know that he is strict, but fair not having to worry if the Gorn has their back.

Though space and time have kept them apart, they have been close friends since meeting aboard the USS Apollo-A for Sundassa Faranfey's promotion party. The young Trill had impressed Nugra with not only her bravery to talk to him but the amount of questions she had. Since then, they have talked to each other over subspace with Nugra giving her a Vss'Kot dagger in honor of her command of the USS Constitution-B and her gift of jestral tea. 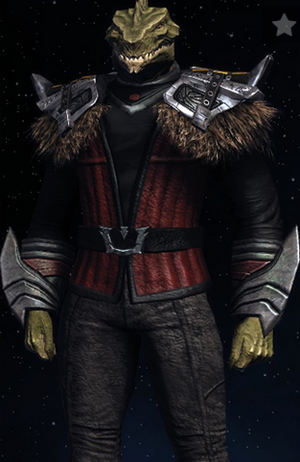 Gorns have a tradition of not having a true last name though they add their father's name to their first when identifying themselves for ceremonial purposes. The Tk' prefix in Gorn means "descended from".

Seev was the youngest of the siblings and remained at home instead of traveling about like her brothers. She has continued to live at home with a little adventure which suits her. She was poisoned once by a Vkk'Nnn bite setup by the Orion assassin Loki that killed her brother later. She hates Orions since then.

While fighting for the Gorn Confederation against the Alliance, Nugra participated in the battle of the singularity. Two fleets got caught in the orbit of a quantum locked planet where they found themselves sealed away from one year on the outside. The rescue fleet arrived but found that 204 years had passed on the inside and the fleets suffered 95% causalities. Nugra is technically only 43 years old, but his time in the singularity has aged him the extra years. This is not seen as a problem as Gorns live up to 900 to 1000 years. If anything, it made him older and wiser.